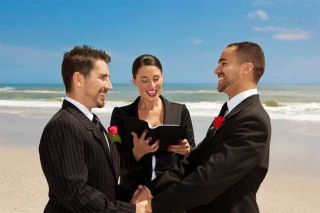 Support for the legality of same-sex marriage has nearly doubled since 1996, with about half of Americans now saying full marriage rights for gays and lesbians should be recognized as valid by the law.

The results, based on Gallup surveys conducted May 3-6, come on the heels of Vice President Joe Biden's comments on NBC's "Meet the Press" Sunday, in which he said same-sex couples are "entitled to the same exact rights, all the civil rights, all the civil liberties" as heterosexual couples.

Such rights are granted in just a handful of states currently. Massachusetts was the first U.S. state to legalize same-sex marriage, in 2004; Connecticut, Iowa, Vermont, New Hampshire, New York and the District of Columbia also offer marriage licenses to same-sex couples, according to the National Conference of State Legislatures. In February 2012, Washington and Maryland passed legislation to allow same sex marriages, though the laws have yet to take effect. In California, the state constitution's ban on same-sex marriage (Proposition 8) was ruled invalid by a federal appeals court, which has postponed enforcement pending an appeal.

Fifty percent of Americans said they support same-sex marriage, just a pinch lower than last year's survey results, when a majority of Americans (53 percent) favored legalization of same-sex marriage. The first time Gallup posed the same-sex-marriage question was in 1996, when 27 percent said they supported it and 68 percent opposed. Since then, in 2007, 46 percent indicated support, while 44 percent said the same in 2010.

Support seems to fall along political and religious lines with nearly two-thirds of Democrats expressing support, compared with 57 percent of Independents and 22 percent of Republicans in this year's survey.

Though the Catholic Church officially opposes same-sex marriage, 51 percent of Catholics in the U.S. say it should be legal, compared with 38 percent of Protestants and 88 percent of those with no religious identity.

The results underscore the divisiveness of same-sex marriage in the United States, say Gallup officials, possibly explaining President Barack Obama's hedging on the issue when it comes to pronouncing his support.

Results from Gallup's Values and Beliefs poll came from telephone interviews with a random sample of 1,024 adults, ages 18 and older, living in all 50 U.S. states and the District of Columbia.