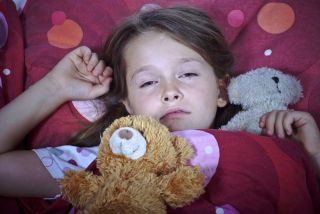 Not get enough sleep cuz your bladder woke you up in the middle of the night? A protein may be the culprit.
(Image: © Joana Kruse | Shutterstock)

For most people, sleep is undisturbed by the need to pee, because our bladders seem to hold more urine over night. But just how this happens, and why some people are unable to do this, has remained a mystery until now.

New research shows that the body's internal clock controls the production of a key protein that helps regulate the bladder's capacity to hold urine before needing to empty.

The findings may someday yield new therapies to help children who involuntarily wet the bed or adults who frequently wake up at night to urinate, researchers said.

"In certain conditions there may be a derangement of the circadian rhythm so that the wrong amount of [the protein] is produced at the wrong time of day," Andrea Meredith, an assistant professor of physiology at the University of Maryland who was not involved in the study, told LiveScience.

By targeting the protein, called connexin43, researchers may be able to induce the correct amount of the protein at the right times, she said. [10 Things You Didn't Know About You]

Previous research has shown that mice with an increased amount of connexin43 have a lower functional bladder capacity — that is, their bladders require less liquid before it triggers the need to pee. The researchers in Japan wondered what role the protein plays in normal bladder function and how it's affected by the time of day. While scientists have long known that humans and other animals have day-night differences in functional bladder capacity, it's been unclear if these differences are due to light or if they are governed by an intrinsic circadian (daily) rhythm.

To find out, the researchers needed to determine how much and how often mice urinate throughout the day, a measurement that is more difficult than it sounds. "Mouse urination events are very tiny; it's not as simple as them peeing in a cup, you measuring it and moving on," Meredith explained.

So the researchers developed a machine that constantly moves filter paper beneath a mouse cage to capture the urine — they saw that the mice's day-night urination differences exist even when they are in 24-hour darkness. Moreover, this normal urination pattern was lost in mice with defective biological clocks, showing, for the first time, that urination is an intrinsic circadian rhythm, Meredith said.

The researchers also found that mice with an abnormal connexin43gene, which produces the connexin43 protein, urinate less frequently than normal mice. And when they looked at the bladder muscle cells of normal mice, they found that the expression of the connexin43 gene oscillates throughout the day and is governed by a certain circadian clock molecule.

Taken together, the results show that connexin43, which helps regulate functional bladder capacity, changes according to our biological clocks. If your body is producing the incorrect amount of connexin43 or if your biological clock is off, you may find yourself in the bathroom at night more than you'd like, the study suggests.

"This research explains why healthy people do not urinate during sleep, from the standpoint of bladder function," study co-author and urologist Dr. Akihiro Kanematsu, of the Hyogo College of Medicine in Japan, told LiveScience in an email.

However, both Kanematsu and Meredith stress that other circadian-regulated proteins and genes likely affect functional bladder capacity.

Whatever the case, the research has implications for treating nighttime urination problems in children and the elderly, Kanematsu said. Solving such problems, he explained, may involve looking at the urine production in kidneys and the arousal levels of the brain, in addition to bladder capacity.

"Thus we can conceive to treat these patients from two sides," Kanematsu said. The first approach is to fix the circadian rhythms themselves, either through behavioral means or medications. "The other way is to find therapeutic targets in each organ, like [connexin43] in the bladder."

The study was published today (May 1) in the journal Nature Communications.