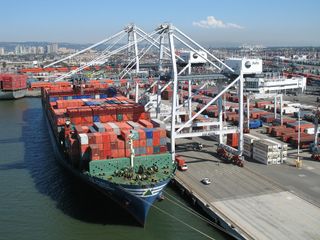 Container cranes are used to load and unload ships in ports and are critical to port operations. Past earthquakes have highlighted the vulnerability of container cranes to damage from even moderate earthquakes.

During the 1995 earthquake in Kobe, Japan, a considerable fraction of the container cranes at the Port of Kobe either collapsed or were damaged beyond repair — leading to significant economic losses for the port and the surrounding region.

Cranes are unique structures and replacement of a broken one can take more than a year. Their continued operation after an earthquake is critical to the continued operation of the port as well as post-disaster recovery for the region in which it is located.

Despite their importance, the seismic performance of cranes has not been studied in the U.S., until now. A new study is underway as part of a National Science Foundation Network for Earthquake Engineering Simulation (NEES) Grand Challenge project.

Several types of earthquake-induced damage are common in container cranes. The first type of damage occurs when earthquake ground-shaking causes the crane to derail. A derailed crane cannot be used, but it takes only several days to replace the crane on the rails. The second type is localized structural damage to the crane. This is more severe because the damaged portions must be repaired or replaced, which may take several months. The most severe type of damage is collapse, which requires the entire crane to be replaced.

To get a better understanding of how container cranes respond during an earthquake, a team led by Glenn Rix at Georgia Institute of Technology have designeda one-tenth scale model of a container crane and will be testing it on the NEES shake table at the University at Buffalo, one of 14 facilities for large-scale testing that are part of the National Science Foundation's earthquake testing network.

The shake table has the ability to simulate the motions of the ground during an earthquake. The objective of the test is to measure the response of the crane from small levels of shaking to those large enough to cause the test-crane to collapse. The data collected during the test will provide information on the likelihood of each type of damage as a function of the level of shaking and will allow us to develop and verify computer models of cranes.

When damage occurs in the test crane, repairs similar to those used in the field will be made to the structure. The repaired crane will be tested again to determine how well the repairs perform during subsequent earthquakes. The upcoming test will be the largest ever performed in the United States and the first shake table test in the world to test a container crane model to collapse.

The information from the test will be used to assess the expected performance of existing container cranes and, if necessary, design retrofit measures to reduce the possibility of damage during earthquakes. The test results will also be used to develop improved design standards for future cranes.

See images, video and background information about the project, with new materials being added as the final test draws closer.