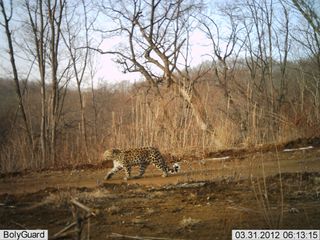 Rare, endangered Amur leopards have been photographed for the first time in China by camera traps in a protected area, the Wildlife Conservation Society announced today (April 25).

The photos, taken in Hunchun Amur Tiger National Nature Reserve in Jilin Province, bolster a survey estimating that eight to 11 leopards live in the northern Chinese province, suggesting the rare animals are returning to China, the WCS said in a statement.

Last month, the reserve staff set up 16 camera traps in areas where tiger and leopard tracks were found during winter survey. Several images of Amur (or Siberian) tigers were also snapped by the cameras.

The Amur leopard is listed as critically endangered by the International Union for the Conservation of Nature, an independent international body that assesses the conservation status of species around the world. Most remaining Amur leopards live across the border in Russia, where camera traps photographed a total of 29 leopards last winter in a portion of the newly created Land of the Leopard National Park. The park covers about 60 percent of the cat's habitat.

Conservationists have estimated that the total number of Amur leopards has been around 30 since the mid-1970s, but the two camera trap surveys suggest that numbers could be rising to 40 or more, the WCS said.