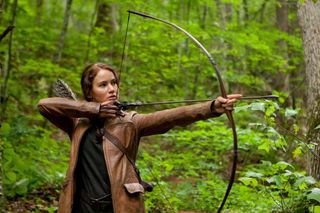 The dystopian novel "The Hunger Games" is one of the most popular young adult books of recent years. But according to the Office for Intellectual Freedom, which released the top 10 most frequently challenged books of 2011 this week, it's also one of the most controversial.

"The Hunger Games," the first book of a trilogy about a teenage girl chosen to battle to the death with other teenagers for the entertainment of her post-apocalyptic countrymen, was the third most-challenged book of 2011 in libraries and schools, according to the Office for Intellectual Freedom, which tracks banned books. Challenges are attempts to ban a book from library shelves, usually because of concerns over violence or sexual content.

There's no doubt that certain subject matter is more likely to disturb young children than enrich them. But parenting experts say that adults often sell kids short in attempts to ban books that contain tough topics

"Kids have very complex emotions and processes of thinking, ways of thinking they need to develop," said Karen Coats, a professor of English who specializes in children's literature at Illinois State University. Reading, Coats told LiveScience, gives kids the chance to develop their "empathy muscles."

"It gives them the exercise that their brains need to make the neural connections that they need," she said. [See top 10 most-challenged books of 2011]

The dangers of book banning

This may be a hard sell to parents who've heard about the ultra-violent arena in "The Hunger Games," the sexual content of the "IM" series by Lauren Myracle, which was 2011's most-challenged book series, or the illustrated nudity of Kin Dong Hwa's "The Color of Earth" series, number two on the challenged-book list. But banning material can often backfire, said Deborah Gilboa, a family physician and parenting writer based in Pittsburgh.

That's true of taking books off shelves — which infringes on other parents' right to parent as they see fit and also does little in a world of e-books and online content, Gilboa said — but also true at home. Forbidden fruit can seem that much more enticing to kids, Gilboa said.

"Instead of saying, 'Don't look at that, don't read that, don't watch that,' I would say, 'This thing, I think, is too advanced for you, so you can read it in this number of months or years,'" Gilboa suggested. "Or say, 'Here's the deal, we can read it if we read it together and we can discuss it.'"

Some kids really are too young to read about violence, child abuse and other disturbing topics, said Alice Honig, a professor emerita of child development at Syracuse University in New York. A preschooler, for example, would probably not be up to the level of the teen-centered "Hunger Games." The key, Honig said, is knowing your own child: their emotional development, their sensitivities, their life experiences. If a child can handle it, books can open the door to important conversations.

"You would want to have discussions with your child about violence, about bullying, about the growth of sexual feeling," Honig said, listing difficult discussions that books might spur. [5 Ways to Foster a Child's Self-Compassion]

In many cases, conversations about tough books can actually strengthen the bond between parent and child, Coats said. By reading along, parents and kids can form mini-book clubs, talking about topics that might not come up as easily in daily life: What do you think of the racial issues in "To Kill a Mockingbird," 2011's 10th-most-challenged book? Was it moral for Katniss, the protagonist of "The Hunger Games" to kill other teenagers to protect her partner Peeta? The questions can be as simple as, "Which character in this book would you be?" Coats said.

"It gives them a way to talk about emotions," Coats said. "All these kinds of questions that they won't answer directly, they will answer in the context of a literary discussion."

Parents can even join forces in these conversations, Gilboa said.

"[If] your kids really want to read 'Gossip Girl,' say 'Okay, let's get a book group going,'" Gilboa said, referring to the 9th-most challenged series on 2011's list. "You'll learn so much about where your kids are and what they're thinking about by listening to your kids talk with their peers about a book like that. You may not like what you hear, but not hearing it doesn't make it not true."