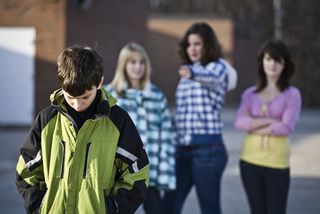 Kids with autism spectrum disorders are three times as likely as their non-affected siblings to experience bullying, a new national survey finds.

The results of the survey, which are preliminary and have not been published in a peer-reviewed journal, hint at some troubling patterns for children who have autistic disorders, particularly those with Asperger's syndrome.

About half of parents (52 percent) also reported that schoolmates deliberately tried to trigger autistic meltdowns in their children.

The mother of one girl reported: "Often kids try to upset her because they find it funny when she gets upset and cries. She is overly emotional, and they seem to get a kick out of this."

The autism spectrum includes a variety of developmental disorders, such as autism, marked by problems with social interaction and communication as well as by repetitive that are behaviors. Asperger's syndrome, is often characterized by a high IQ, obsessive, narrow interests, and a difficulty socializing with others.

Bullies and the bullied

Unlike friendly teasing, bullying is long-term torment that doesn't occur between social equals. Research on bullying suggests that while many factors can put someone at risk of being a target, bullies tend to choose victims they know their classmates won't defend. Children who are anxious about social interactions are at particular risk, according to a 2011 study of fifth-graders.

The new IAN survey recruited parents of children with autism spectrum disorders (ASD) from around the country to answer online questions about their children's experiences with bullying. Based on the parents' answers, 63 percent of the ASD children had experienced bullying at some point, the researchers found. Of the 1,079 kids in the study who weren't home-schooled, 39 percent had been bullied just in the past month, compared with 12 percent of their non-ASD siblings.

Teasing was the most common form of bullying, with 73 percent of kids experiencing taunts. About half of ASD kids had been deliberately ignored or excluded by peers, and 47 percent had been called names. Thirty percent had experienced physical bullying, such as hitting. And in 53 percent of cases, parents reported that kids had tried to goad their ASD child into a tantrum.

Children with autistic disorders also were more likely than their non-ASD siblings to have bullied someone themselves (20 percent compared with 8 percent). This fits into a pattern in bullying relationships in which bully victims also bully, according to the researchers.

For children with autism, the bully label may be slightly more complex. Social deficits can mean that these children don't understand that they are being bullies, IAN reported.

"My son doesn't realize he is bullying," one parent explained on the survey. "He is trying to get other kids to pay attention to him, so he does it by grabbing their ball away from them or getting 'in their face' when they say to stop."

Another parent blamed the child's rigidity for his bullylike behavior.

"He has very set rules of behavior that he expects all to follow," the parent reported. "He doesn't see how his reaction to perceived slights or rule-breaking is sometimes bullying."

The study found that bullying peaks between fifth and eighth grade, with 42 percent to 49 percent of kids with ASD experiencing bullying during this time. For children with social difficulties, bullying can further isolate them.

"The bully made life a complete hell for my son," said one mother who ultimately withdrew her child from school. "He came home from school crying every day and begging to never have to go back."