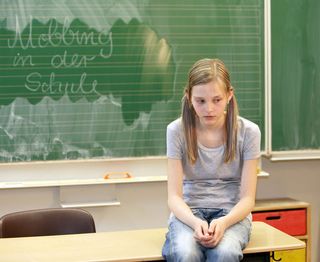 Kids who have trouble interacting with others are at high risk of being bullied.
(Image: © Christine Langer-Pueschel / Shutterstock)

Children who want to interact with their peers but find the prospect of making friends anxiety-inducing are at high risk of rejection and bullying, a new study finds.

These "anxious-solitary" children have fewer friends than other kids their age, which can leave them vulnerable to victimization by bullies, according to study researcher Gary Ladd, a professor of family and human development at Arizona State University.

"Understanding withdrawn children's friendships is important because they have fewer contacts with children their own age," Ladd said in a statement. "Because the consequences of peer isolation can be severe, it may be particularly important for withdrawn youth to develop and participate in friendships through organized sports, play dates, and other such activities."

An earlier study published in 2010 in the journal Child Development found that bullies pick on unpopular children. Gay and lesbian students, or kids perceived to be gay or lesbian, are also at risk.

Ladd and his colleagues asked about 2,500 fifth-graders to rate their peers' behavior, including aggression, emotional sensitivity and social behavior. The researchers collected similar reports from the students' teachers. The first round of reports was taken at the beginning of the fifth-grade year, and a second round was taken at the end of the school year.

Even compared with unsociable children, the researchers found, anxious-solitary withdrawn kids have fewer friends and are more likely to lose their friends over time. Anxious-solitary kids were also more emotionally sensitive than their peers and were more likely to be excluded and bullied. Having stable friendships protects children from victimization, the study found.