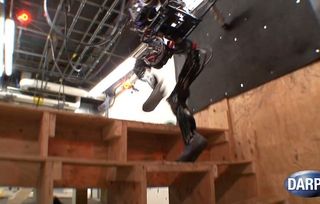 A DARPA humanoid robot climbs stairs with the assistance of one arm.
(Image: © DARPA)

A new U.S. military challenge demands robots that can drive vehicles, climb ladders, and handle power tools during disaster response scenarios — but competitors don't all have to come in the familiar humanoid form.

The U.S. Defense Advanced Research Projects Agency (DARPA) pointed out that it welcomes robots in any form to compete for its $2 million robotics challenge issued on April 10. Its added clarification came in a video posted yesterday (April 11) featuring past footage of two humanoid robots walking up stairs and doing push-ups.

This statement comes despite the humanoid forms of the DARPA robot and another robot created by Boston Dynamics — known as Atlas or PETMAN — seen in the newly posted video. DARPA has said such humanoid robots resemble the final robot "platform" it plans to provide for testing purposes in its robotic challenge.

The original DARPA solicitation for the robotics challenge said its robot platform "is expected to have two arms, two legs, a torso and a head" for competitors who want to test their robot software. It also contained an image of two humanoid robots working side by side.

But the solicitation also stated that "there is not a requirement that it have a humanoid form." That means competitors who make their own robots for the DARPA challenge can let their imagination roam free — as long as they feel confident their nonhumanoid design can do the job of humans in the challenge obstacle course.

The new challenge has focused on creating robots that can work like humans in disaster zones following natural disasters, industrial accidents or terrorist attacks.

DARPA also made a point of reaching out to people "beyond traditional robotics developers" in the description for its latest video. The group hopes the $2 million final prize — plus a series of prior contracts worth up to $3 million — can attract developers who typically make hardware, software, modeling and even video games.