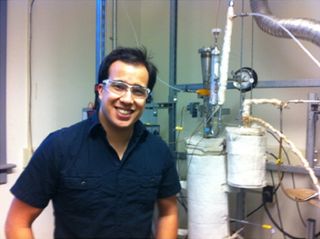 Using a combination of experiments and mathematical models, Robert Coolman, a graduate researcher at the University of Massachusetts Amherst, designs and builds biofuel reactors and studies how the chemicals that make up plants interact with catalysts to form fuel.

Under the direction of George Huber and Lakis Mountziaris, Coolman studies a technique for producing biofuels known as catalytic fast pyrolysis. Rather than using microbes, this process is a one-step, thermo-catalytic technique for converting inedible plant matter (such as sawdust, corn stover and switchgrass) into fuels that work in today's automobiles.

As industry integrates this and related technologies on a progressively larger scale, you'll hopefully start seeing green gasoline at your local pump. Unless there's a sign that tells you your gas came from wood or grass, you won't be able to tell the difference. Read more information about biofuels and your car.

Below, Coolman answers the ScienceLives 10 Questions.

What inspired you to choose this field of study? It was sort of a fluke, actually. As an undergrad at Oregon State, I saw a future in the integration of advanced plastics recycling using pyrolysis. In my search for a graduate school, it became apparent this research wasn't taking place in academia anymore. It was right about then I learned that the power of pyrolysis also applies to biofuels. Soon enough, I was studying this very technology at University of Massachusetts Amherst.

What is the best piece of advice you ever received? "Choose your mentors wisely."

Everyone has an opinion about what you should and should not do with time and talent. Keep contact with successful people you identify with and those who understand what you're going through. Only those people can help you apply yourself effectively.

What was your first scientific experiment as a child? Chemistry is something I've loved ever since I knew what it was. But before then, one of my earliest fascinations was patterns: Colored blocks, Legos, Lightbright, Spirograph, etc.

Experiment-wise, the first thing I can remember is playing with a "Connect Four" board and exploring various checkerboard patterns. Even as a kindergartener I must have intuitively understood that "red and black should come out even," because it drove me absolutely crazy that one of my patterns used more red than black pieces.

What is your favorite thing about being a researcher? Being on the cutting edge means nobody knows exactly how to take the project from start to finish. It brings me a tremendous amount of satisfaction to come up with a new method, a new design or a new idea, and have something worthwhile come out of it.

My favorite tasks run along the lines of: "Build this thing to do something new, but, no, you don't get a manual, because it's never been done before." I never had such opportunities before becoming a graduate researcher.

What is the most important characteristic a researcher must demonstrate in order to be an effective researcher? I'm still a student, so I'm still figuring that out. Motivation is a huge part of consistently producing quality work. The most effective method I've found is to keep myself inspired.

What are the societal benefits of your research? Biofuels are important for three reasons: First, as a matter of national security, it's in our interest to produce energy domestically. As fossil fuels become depleted, we need to harness the power of nature in other ways on American soil; biofuels are one such method.

The second reason is existing carbon-based infrastructure — all the machines that run on gasoline, diesel and natural gas. The only way to use this infrastructure sustainably is by capturing the carbon that infrastructure releases to the atmosphere in a way that turns it back into fuel.

To make a biofuel, we then take the plant's carbon and energy and convert it into fuels that work in our cars. It's paramount we understand biofuels are a critical way to make energy use green without making drastic changes to current infrastructure. While an infrastructure built around hydrogen, for example, would be worth our time to build, such integration will take at least a decade. Biofuels are a way to use green energy today.

The third reason is reducing climate change. A fossil fuel is never green due to one-way transfer of carbon from the geosphere to the atmosphere. A biofuel, when done right, is green due to complete cycling of carbon between the biosphere and atmosphere. There are three conditions that must be satisfied if we wish to halt climate change via biofuels:

As far as the advantages of the particular biofuel technology I study, it only uses plants we don't eat, so its use will never directly interfere with food production.

Who has had the most influence on your thinking as a researcher? My graduate advisors, George Huber and Lakis Mountziaris, are constantly improving my methods. Octave Levenspiel, a textbook writer, has been tremendously helpful for countless reasons, not the least of which is insight into why it's better not to do things a certain way.

To keep myself inspired, I look to figures in the public eye such as Neil DeGrasse Tyson, Bill Nye, Richard Feynman and Carl Sagan. Without them I would not have the appreciation for science I do today.

What about your field or being a researcher do you think would surprise people the most? I say this all the time and it always raises eyebrows: If you get accepted as a graduate student in science or engineering, class tuition is [usually] waived and they pay you for doing research.

In the science, technology, engineering and math fields, you don't pay for grad school; the school pays you. I didn't even know this until my junior year of undergrad. I was still in half disbelief even when I got that first check in the mail.

If you could only rescue one thing from your burning office or lab, what would it be? I'd save my lab mates. Can't do research unless you have someone to get beer with after. I guess you need a lab too, but that can be rebuilt.

What music do you play most often in your lab or car? Weekends I go swing and blues dancing a lot. I particularly like Norah Jones and Diana Krall. The other half of my music revolves around electronic — artists like Rob Dougan and Owl City. I'm not proud to admit it, but these days I let Pandora do most of the heavy lifting.