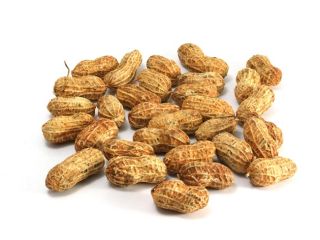 Peanut allergy can be a life-long allergy affecting about 2 percent of the population. Peanut allergy is the most common cause of death due to foods, according to the Asthma and Allergy Foundation of America.
(Image: © iikozen, stock.xchng)

Along the walls of your small intestine lies a fortress filled with immune cells. Like border guards at a checkpoint with an itchy trigger finger, their job is to allow nutrients to pass safely into the bloodstream and to kill any bacteria or unwelcome freeloaders that try to get through.

Sometimes — in the case of allergies, celiac disease or inflammatory bowel disease — these guards are a little too trigger-happy, mounting a violent attack against an innocent peanut or wheat protein.

Now scientists have identified cells in the small intestine that can escort certain proteins across the intestinal lining and then introduce them to the immune system on friendly terms. The discovery, published in the journal Nature on March 15, may lead to therapies for severe food allergies and similar adverse reactions to food. [9 Weirdest Allergies]

No one had a gut feeling

The researchers, led by Rodney Newberry at Washington University in St. Louis, said the finding came as a surprise after months of frustration. Newberry and others in the field of immunology had assumed that dendritic cells, which are part of the immune system, somehow reached into the center of the gut to sample passing food particles. Then these cells would somehow find antigens — proteins that trigger an antibody, or immune, response — and pull them deeper into the intestinal wall for further scrutiny.

Once antigens are pulled from the intestine for inspection, the dendritic cells' comrades in the immune system either neutralize or kill them if they are deemed foreign and potentially harmful.

So, Newberry enlisted WUSL colleague Mark Miller, an expert in live, microscopic imaging, to create a video of the inside of a mouse gut to see precisely which kinds of dendritic cells are involved and how. But they could find no evidence of any dendritic cell reaching into the center of the gut, called the lumen, as scientists had assumed. Instead, after months of looking in the wrong area, they spotted an apparent mediator that escorted antigens through the intestinal wall and handed them off to the dendritic cells.

Escort through the mucus

The mediators are goblet cells, the very same type of cells that secrete the protective barrier of mucus in the small intestine that regulates the passage of nutrients and other chemicals. Miller captured images of a goblet cell engulfing a sugar antigen just consumed by the mouse and bringing it to a dendritic cell.

"Everyone has concentrated only on the fact that goblet cells secrete mucus, but I think in the face of our findings, you could perhaps wonder whether the problem in inflammatory bowel disease might result in part from goblet cells not delivering antigens to the correct place," Newberry said. "Or maybe they're not delivering antigens at all or too many antigens. We just don't know yet."

The researchers said that goblet cells might preferentially escort antigens with tolerogenic properties, that is, the kind that promote immune tolerance. Thus, the researchers hope that someday they can use goblet cells as targets for a drug therapy that can tame a hyper-vigilant immune system.

Goblet cells perform the same function in people as in mice, Newberry said, based on his team's analysis of healthy human intestinal tissue removed from patients undergoing weight-loss surgery.

Miller attributed the unexpected discovery to the power of the two-photon excitation imaging technique, which takes advantage of fluorescent dyes to image deep into living tissue. "Often, you'll come across some new phenomenon that you didn't expect," he said. "Sometimes, just by looking, you realize there's more to a system than you originally thought."