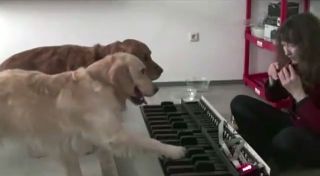 A French woman has taught her golden retrievers to play the piano.

In a new YouTube video, the dogs sit side by side at an oversize keyboard, flawlessly pawing the keys in response to musical notes played by their owner, who accompanies them on a flutelike instrument called an ocarina.

Slowly but surely — and delightfully — the trio progresses through a short musical number titled "La Valse des Puces," or "Waltz of the Fleas." [See video]

It's quite a stunt. But what exactly is going on here?

Charles Snowdon, a psychologist and zoologist at the University of Wisconsin-Madison who studies animal responses to music, weighed in: "The dogs are being cued by their owner, which is different than memorization. She's playing notes and my guess is what they've done is learn the relationship between the notes she's playing and where they are supposed to put their paws," Snowdon told Life's Little Mysteries.

So, the dogs most likely aren't playing the correct notes because they tonally understand which notes sound right, but rather because they've been trained to respond to certain sounds on the ocarina by pressing corresponding keys on the piano. Or perhaps there is some cue we can't see in the video. Either way, it is still a pretty neat trick.

The result sounds (somewhat) melodic to us, but the dogs probably don't know it. "It's not clear that they're listening to it as music," Snowdon said. [8 Amazing Animal Tricks]

On the other hand, they might be. Snowdon is a pioneer in the study of how animals respond to "species-specific music." Most animals have very different vocal ranges and heartbeat tempos than humans, so they simply aren't neurologically wired to enjoy music designed for human ears. He has worked with composers to create music using pitches, tones and tempos that are more familiar to specific animals. For example, they've composed music tailored for tamarins — monkeys with vocalizations three octaves higher than our own and heartbeats twice as fast. The songs sound shrill and unpleasant to us, but they are music to tamarins' ears.

But what about dogs? According to Snowdon, large dogs such as these golden retrievers have vocal ranges that happen to be quite similar to those of adult male humans. "So, it is possible that they might be responsive to music in our frequency range. My prediction is that a big dog might be more responsive to human music than a smaller dog such as a Chihuahua," he said.

More research is needed to determine whether dogs really do appreciate human music, or if these canine prodigies are just humoring us.