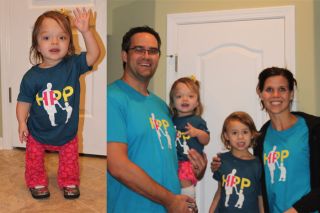 Evie Elsaesser (left) has a rare bone condition called hypophosphatasia, and has received an experimental treatment for the disease since she was 2 months old. Now 2 years old, Evie can stand up by herself. On the right, she is pictured with her father, John, mother, Lindsey and her 4-year old sister Lyla, on rare disease day, Feb. 29, 2012.
(Image: © Lindsey Elsaesser )

When Lindsey Elsaesser was 20 weeks pregnant, an ultrasound revealed her unborn baby girl had extremely fragile bones. Doctors suspected the child had a bone disorder, and would not live long after birth.

"They thought she would die from respiratory failure because her bones were so weak," Elsaesser said.

When Elsaesser's daughter, Evie, was born in September 2009, doctors were cautiously optimistic about her condition. While Evie's bones were transparent in X-rays, they sufficiently supported her lungs.

But two weeks later, Evie began to have seizures, and a genetic test revealed she had hypophosphatasia, a rare metabolic condition that prevents minerals such as calcium and phosphorus from being properly deposited in bones.

For babies like Evie, with severe forms of the disease, the condition is life-threatening, and half die before the age of one. In every case known at the time Evie was born, infants with hypophosphatasia and seizures had died within 18 months, Elsaesser said.

There is no approved medical treatment for hypophosphatasia, but, thanks to a new experimental therapy, the outlook may change.

When she was 2 months old, Evie was given a drug called asfotase alfa, an engineered protein designed to take the place of an enzyme that does not work properly in hypophosphatasia patients.

Evie is now 2 years old, and she can stand and walk with a walker. Last May, she was able to go off respiratory support, which she had been using for 17 months, said Elsaesser, who is now 28 and lives in Omaha, Neb.

"Without the treatment, her bones would have kept deteriorating," until she could no longer breathe, Elsaesser said.

Evie was part of a clinical trial of asfotase alfa, the results of which will be published tomorrow (March 8) in the New England Journal of Medicine.

In the study, which included 11 infants and children with severe hypophosphatasia, the drug healed bones, reduced deformities of the skeleton and improved children's strength and breathing abilities. One 3-year-old who was unable to stand before treatment climbed up a ladder with assistance after two months of therapy. And a baby who required respiratory support when she was born was off support when she was 2, and able to walk and run at 3.

"This therapy proved to be life-saving in these infants, and in many instances, health restoring," said study researcher Dr. Michael Whyte, medical-scientific director of the Center for Metabolic Bone Disease and Molecular Research at Shriners Hospitals for Children in St. Louis.

Previous attempts to treat patients by transfusing the needed enzyme into their blood proved unsuccessful. With this new therapy, the researchers engineered the protein so that it makes its way to the bones "where it really needs to be," Whyte said.

After two months of treatment, 90 percent of patients showed changes in their X-rays that were significant enough to consider them responsive to the drug. One patient, who had no bones visible in X-rays at the beginning of the study, did not initially respond to the drug, but was able to move all limbs after seven weeks of treatment. Nine of the patients are still receiving the therapy.

One patient died during the study, but this was determined not to be related to the treatment.

The most common side effect of treatment was a reaction at the injection site. Other side effects observed in patients in the study, such as infections and respiratory problems, are consistent with symptoms of this condition, the researchers said.

"It's extremely promising," Dr. David Rimoin, a medical geneticist at Cedars-Sinai Medical Center in Los Angeles, said of the treatment. "It seems to, without any question, work in these patients," Rimoin said.

Future work will be needed to see if the drug can completely reverse the condition if started as soon as it is diagnosed, said Rimoin, who with his colleagues is collecting information on hypophosphatasia patients to better understand the natural course of the disease. This will help researchers know how effective therapies are when they are used, Rimoinsaid.

Today, Evie is doing great, and is enrolled in music classes, Elsaesser said. She has had several surgeries on her feet and head, but unless you look closely, "you really can't even tell that she's sick," Elsaesser said.

Elsaesser plans to continue Evie on the therapy. "It's made a world of difference for her," Elsaesser said. Eventually, Elsaesser hopes the therapy will replace Evie's need for seizure medications.

The new study was funded in part by Enobia Pharma, a company that manufactured asfotase alfa. Last month, the company was acquired by Alexion, which is the current drug developer.

Whyte and colleagues are currently testing the treatment on adults and children with less severe forms of hypophosphatasia.

Pass it on:Infants with a life-threatening, often fatal, bone condition saw their symptoms improve after use of an experimental therapy.