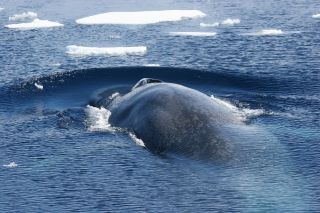 After commercial whalers decimated their population during the 20th century, the Antarctic blue whale may be on the verge of a comeback. The first genetic analysis of the whales has found a surprisingly high level of diversity in the population.

"Fewer than 400 Antarctic blue whales were thought to have survived when this population was protected from commercial hunting in 1966," Angela Sremba, who performed the research as part of her master's degree at Oregon State University, said in a statement.

"The exploitation period, though intense, was brief in terms of years, so the whales' long life span and overlapping generations may have helped retain the diversity," Sremba said. "Some of the Antarctic blue whales that survived the genetic bottleneck may still be alive today."

Since the International Whaling Commission banned commercial hunting of the Antarctic blue whale (Balaenoptera musculus intermedia) in 1966, the subspecies has rebounded and now numbers around 2,200 individuals. The whales live in chilly waters around Antarctica and survive by eating tiny crustaceans called krill. They are related to both the subspecies that lives in the North Atlantic and Pacific oceans, called B. m. musculus, and the pygmy species (B. m. brevicauda) found in the Indian and South Pacific oceans.

"These animals are very long-lived — maybe 70 to 100 years — and they can grow to a length of more than 100 feet [more than 30 meters] and weigh more than 330,000 pounds [150 kilograms]," study researcher Scott Baker, associate director of the Marine Mammal Institute at Oregon State University, said in a statement. "There is a jawbone in a museum in South Africa that takes up most of the lobby." [Album: The World's Biggest Beasts]

The researchers analyzed the genetics of 215 Antarctic blue whale tissue samples (from 166 individuals) collected between 1990 and 2009. They specifically examined certain genetic markers to see how closely related these different individuals were, and found they weren't as related as researchers would expect from a small population — they had surprisingly high levels of genetic diversity.

Some endangered wildlife populations, such as the Florida panther, end up small and extremely inbred, which means they have high levels of relatedness between two individuals and low genetic diversity. These inbred populations have trouble breeding, because detrimental genes become abundant in the population, and this lowers their ability to have healthy offspring.

The genetic study indicates that the whales have escaped the inbred fate of the panther: Their numbers are small, but they still have high genetic diversity and don't seem to suffer from much inbreeding. That, Sremba said, may bode well for their future recovery.

"This is a poorly understood species of whales, despite its history of exploitation," Baker said. "Only now are we developing the technology to study such a small number of whales spread across such a vast habitat."

The study is published online today, March 7, in the journal PLoS ONE.