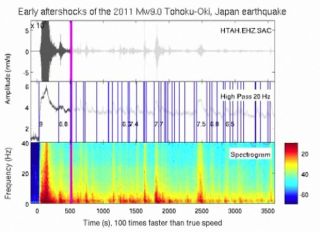 Scientists have taken the seismic waves from last year's massive Japan earthquake and converted them into audio waves.

The new audio waves allow experts and general audiences to "hear" what the 9.0-magnitude earthquake sounded like as it moved through the earth and around the globe on March 11, 2011.

The earthquake, the world's fourth largest since 1900, was also one of the best-recorded earthquakes of all time, due to the thousands of seismometers in the region and Japan's willingness to share its measurements with the rest of the world. The new way of looking at (or listening to) the data helps scientists understand how the quake unfolded.

The different sounds can help explain various aspects of the earthquake sequence, including the main shock and nearby aftershocks. One measurement, for example, was taken near the coastline between Fukushima  –  the nuclear reactor site  –  and Tokyo. The initial blast of sound is the 9.0 main shock. As the Earth's plates slipped into new positions, aftershocks are heard as the "pop" noises immediately following the main shock sound. These aftershocks are likely to continue for years.

As the waves from the earthquake moved through the earth, they triggered new earthquakes thousands of miles away. In another audio example, taken from measurements in California, the quake created subtle movements deep in the San Andreas Fault. The initial noise, which sounds like distant thunder, corresponds with the Japanese main shock. Afterwards, a continuous high-pitch sound, similar to rainfall that turns on and off, represents induced tremor activity at the San Andreas.

This animation not only helps scientists explain the concept of distant triggering, it provides a useful tool for better identifying and understanding seismic signals in other regions.

The human ear is able to hear sounds in frequencies between 20 Hz and 20 kHz, a range on the high end for earthquake signals recorded by seismometers. Georgia Tech's Peng, graduate student Chastity Aiken and other collaborators in the United States and Japan simply played the data faster than true speed to increase the frequency to audible levels. The process allows data recorded over minutes or hours to be heard by audiences in a matter of seconds.

The research is published in the March/April edition of Seismological Research Letters.