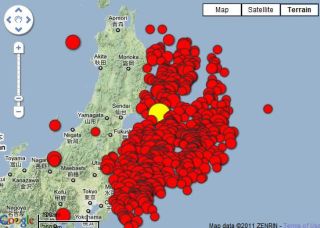 A 7.1-magnitude earthquake struck off the coast of Japan today (April 7) just 21 miles (34 km) from the epicenter of the massive 9.0 one that struck on March 11. Today's quake is the latest in a series of aftershocks smaller quakes that follow the largest one in what is generally a steadily decreasing sequence.

After a large earthquake, tectonic plates the huge slabs of the Earth's crust that caused the quake by banging together continue to readjust the stress along a fault long afterward, which triggers aftershocks. Hundreds of magnitude 5 aftershocks and more than 50 magnitude 6 ones have rocked Honshu, Japan's largest island and home to 100 million people, since March 11.

The 7.1-magnitude seismic event of today ranks as the third largest of them. Is it surprising that such a large aftershock would happen now, when many in Japan felt the worst was behind them?

"It's not at all surprising that an aftershock of this magnitude would occur nearly a month after the main shock," Rich Briggs, a USGS geophysicist based in Golden, Colo., told Life's Little Mysteries. "While the frequency of aftershocks decays with time, it's possible to have large aftershocks at any point during the aftershock sequence." Aftershocks lessen in frequency with time, Briggs explained, but that doesn't mean they can't be extremely powerful when they do happen. "Because of the immense size of the Tohoku main shock, large aftershocks are still likely."

According to Morgan Page, a geophysicist with the USGS in Pasadena, Calif., they will remain likely for years to come.

"This aftershock sequence will continue for years, even decades," Page said. Regions near Sendai, about 80 miles (130 km) west of the quake's epicenter, are most susceptible to continuing aftershocks. Farther away, aftershocks become less and less likely, Page said.

A year from now, the number of aftershocks in Sendai will be a fraction of what they were right after the main quake although, triggered by a magnitude 9.0 quake, they will still register.

Even as the aftershocks become less common, big ones may still strike. Chile saw this firsthand when a 6.6-magnitude aftershock ruptured near Maule in February, almost a year after what is now the sixth-largest earthquake in recorded history, magnitude 8.8, hit the same region.

"Luckily each generation of aftershocks has far fewer earthquakes than the previous generation (provided a very large aftershock does not occur), so that the sequence will eventually die out," Page said.

The probability of major earthquakes happening in future has not been raised significantly by the one in Japan, the USGS said in a statement. Yet that probability hasn't decreased, either. Large earthquakes have struck along the Pacific Ring of Fire, along which Japan sits, in the past, and will continue to do so in the future.

One concern is based on a magnitude 6.2 aftershock that hit just west of Tokyo outside the zone where most of the aftershocks from March 11 ruptured. But this was not the only aftershock to occur outside the main cluster, and it's not usual to have a few aftershocks somewhat far away. "I am quite skeptical of apparent migration of aftershocks to the southwest," Page said. "I don't see it in the aftershock map."

This article was provided by OurAmazingPlanet, a sister site to Life's Little Mysteries, with contributing editing by Natalie Wolchover.