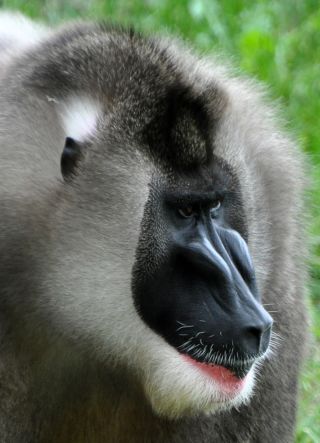 A rare and endangered monkey in an African equatorial rainforest, the wild drill, may see a dramatic population decline if the forest dries out and vegetation becomes sparser amid warming temperatures, researchers report.
(Image: © Courtesy of Nelson Ting)

Closely related to baboons and mandrills, endangered wild drills (Mandrillus leucophaeus) are found in the African equatorial rainforest. Researchers studied DNA from 54 drill samples, most of which were poop collected in the Cross-Sanaga-Bioko Coastal forests that stretch across portions of Nigeria, Bioko Island (equatorial Guinea) and Cameroon.

Comparing monkey DNA sequences can tell researchers about their ancestors. If the ancestral population was small, there would be fewergenetic differences in the population, andgenetic sequences would be similar between two, even unrelated, individuals.

"Looking at its modern genetic diversity, you can infer changes in past population size," study researcher Nelson Ting, a professor at the University of Oregon, said in a statement. They saw a clear population decrease in the drill's genes. "The drills went through a large population collapse — as much as 15-fold."

That evidence led them to the fossil and pollen records, looking for when this population collapse occurred. They found a drop in forest pollen (and by extension, a drop in forest habitats, the drill's prime habitat) that "occurred sometime around the mid-Holocene, which was about 3,000 to 5,000 years ago," Ting said.

At that time, temperatures across equatorial Africa were hotter and dryer and there was less forest cover. Today's changing climate could have the same effects, which could spell disaster for the drill.

"We could see many of these equatorial forests becoming very arid. Forest will be lost as vegetation changes to adapt to dryer conditions," Ting said. "This type of animal, which already is very much endangered because of hunters, would not be able to deal with the level of climate changes that could be coming."

The study was published online Feb. 10 in the journal Ecology and Evolution.