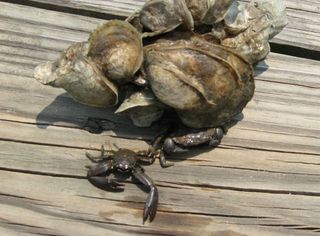 An invasive crab species could be making oysters "clam up" and is altering the makeup of reefs along the coast of Georgia, a new study finds.

Over the past 10 years, marine biologists have noticed that hordes of non-native porcelain crabs (Petrolisthes armatus) have shacked up next to the region's oysters. But far from being friendly neighbors, the crabs are filter feeders that comb the waters for the same food as oysters do.

Researchers at Georgia Tech looked at sample baby oyster populations forced to share a habitat with non-native crabs and compared them with a control group of isolated oysters. Their findings, detailed in the journal Biological Invasions, showed that the presence of the crabs stunted the oysters' growth.

"One of the reasons can be that the oysters are suffering from the competition for food," explained researcher Amanda Hollebone, now at Georgia Southern University, "or it might be that the crabs are disturbing the oysters enough that they are literally clamming up.

Besides being a nuisance, porcelain crabs have become a new food source for native crabs that regularly fed on maturing oysters.

“We’re seeing opposing effects from these crabs,” said researcher Mark Hay of Georgia Tech. “Since the native crabs are eating the porcelain crabs, the baby oysters are not being attacked as much.”

The researchers don’t know if the tropical crabs hitched a ride aboard ships coming from Panama, or whether warmer water temperatures encouraged the crabs to expand northward from Florida—or both.

What they know for sure, Hay says, is that the effect has been that more oysters are surviving—albeit smaller ones.