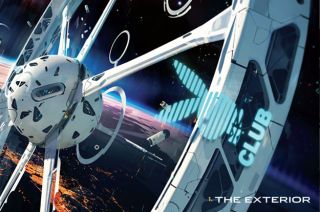 The Playboy Club in space will be on a station in orbit, like a cruise ship.
(Image: © Thomas Tenery/Playboy Enterprises)

Playboy is about to launch into the final frontier, at least in its imagination.

The iconic adult-magazine company has dreamed up a vision of a Playboy Club in space — a sprawling sci-fi-inspired depiction of fun and games on a huge private space station – in conjunction with the space tourism company Virgin Galactic. The results appear in the March issue of Playboy magazine on newsstands now.

A zero-gravity dance club, a casino featuring "human roulette" and a restaurant for fine dining are just some of the amenities envisioned by artist Thomas Tenery and released by Playboy Tuesday (Feb. 22). The magazine worked with several futurists and scientists, including Virgin Galactic head designer Adam Wells, to illustrate the potential space Playboy Club.

"As Virgin Galactic gets closer to becoming the world's first commercial space line, Playboy is eagerly pondering the creation of the ultimate intergalactic entertainment destination," Playboy editorial director Jimmy Jellinek said in a statement.  "This heaven-in-the-heavens will exceed starry-eyed travelers' wildest dreams, and guests will truly experience a party that's out of this world."

Founded by British billionaire Sir Richard Branson, Virgin Galactic is a private space company seeking to become the world's first passenger spaceliner service. The company has built the first commercial suborbital spacecraft, called SpaceShipTwo, and is selling tickets for flights at $200,000 per seat.

The first rocket-powered test flights of SpaceShipTwo are expected later this year. The air-launched spacecraft has already performed a series of unpowered drop tests and captive-carry flights with its massive mothership, the WhiteKnightTwo.

Playboy's clubs were launched by magazine founder Hugh Hefner in the 1960s. But every Playboy Club has the same limitation: It's stuck on Earth.

"The Playboy Club in space will be on a station in orbit, like a cruise ship," Playboy writers A.J. Baime and Jason Harper explain in a description. "Orbiting Earth is one idea, but it could also travel around other celestial bodies." [Gallery: Playboy's Space Club & Other Private Space Station Ideas]

Tenery's paintings suggest the club could be built on a vast wheel-shaped space station that would spin to create a sort of artificial gravity. Unmanned cargo ships could be shot up to the space station to keep the club stocked with supplies.

"You could literally swing around the dark side of the moon," Wells told Playboy.

A big selling point would be the restaurant, which would be built into the spinning section so diners (and their food) wouldn't float off their seats and tables, explained Baime and Harper, who also sought input from futurist Thomas Frey of the Davini Institute think tank, and former NASA scientist Stan Kent.

A plethora of windows (Virgin Galactic's SpaceShipTwo rockets ships are covered with viewports) would also give diners the atmosphere – pun intended – of flying in space. In Tenery's depictions, the space game room would include a roulette system in which you are the ball, as well as zero-gravity bungee jumping and the obligatory space bar.

"The entire Kama Sutra will have to be reimagined according to the rules of zero-gravity physics," Baime and Harper wrote.