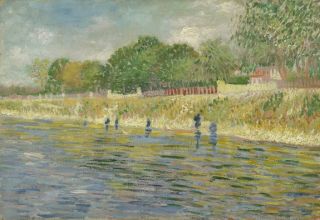 An area in the brain's pleasure center activates when a person is viewing a piece of art, say, that they find to be beautiful. (Shown here, Van Gogh's "Banks of the Seine," 1887).
(Image: © Vincent van Gogh Museum, Amsterdam.)

When we find something aesthetically pleasing, the sensory areas of the brain light up, and the more beautiful we find, say, a piece of art,  the greater the brain activity in certain regions, a new study shows.

By further investigating the connection between humans' subjective preferences and brain activity, scientists will someday be able to pinpoint various characteristics that make a painting, musical number or other sensory experience beautiful, researchers said.

"For the first time, we can ask questions about subjective preferences and relate them to activity in the brain," lead researcher Semir Zeki, a neurobiologist at the University College London in the United Kingdom, told LiveScience. "There are some people who would prefer [beauty] to remain a mystery, but that's not how scientists view things."

In a previous study, Zeki found that an area in the pleasure and reward center of the brain is more active when people view a painting or hear a piece of music that they think is beautiful, compared with art they didn't find particularly pleasing. Because the brain activity of study participants rose accordingly with their ratings of beauty, the results suggest that scientists can look at the brain to objectively measure an experience that seems wholly subjective.

"So the question that we askedis: Do beautiful objects have any specific characteristics that render them beautiful?" Zeki said.

Measuring beauty in the brain

If you look at a painting, video or some other piece of visual art, there are many "domains" that could contribute to the perception of its aesthetics, such as color, shape and motion. For the new study, Zeki and his colleague, Jonathan Stutters, zeroed in on motion, which is the simplest visual attribute, Zeki said.

The researchers used a computer program to generate sets of white dots moving on a black background. The eight patterns all had the same number of dots and changes in speed, but differed in the way the particles moved: Some of the patterns involved dots that moved uniformly on a grid, while others had groups of dots that moved in a seemingly random way.

They then had 16 adults view the patterns twice — once while in a functional magnetic resonance imaging (fMRI) scanner, which measures brain activity by detecting changes in blood flow, and once before going into the machine. With each viewing, the participants had to rate how much they likedeach visual stimulus.

"It turns out that there are certain patterns that are almost universally liked," Zeki said, referring to those preferred by 14 out of the 16 participants.The researchers also found that a certain sensory brain area called V5, which is thought to play a major role in motion perception, activated more strongly when the participants viewed patterns they preferred the most.

By analyzing the participants' preferences and the fMRI data, the researchers were able to pick out certain characteristics — such as the separation between dots — that made some patterns more preferable than others.

In a follow-up experiment, which was not detailed in their study published online today (Feb. 21) in the journal Open Biology, Zeki and Stutters created other patterns that utilized the characteristics they found. Participants overwhelmingly preferred these new patterns to the old ones.

"It's nice to see that people are breaking down the aesthetic experience to basic processes," said Marcos Nadal Roberts, a psychologist at theUniversity of the Balearic Islands in Spain, who was not involved with the study."If we don't break it down to smaller pieces, it will be very hard to understand the bigger picture."

"Beauty is not just about an object and all its features, it's also about the person and all of his or her features," Roberts told LiveScience. "So it's subjective and objective, both happening at the same time."

Roberts said that the study could have been more relatable to the real world if the researchers had used more natural forms of motion, such as the movement of waves in the ocean, the flocking of birds or the rustle of leaves in a tree as the wind blows.

The abstract motion of dots isn't something that people would typically say is "beautiful," Zeki concedes.

Zeki is now looking to tease out preferred characteristics in the other domains, and eventually combine them to get a better picture of the objective qualities of visual beauty. "This is just the tip of the iceberg," he said. "Actually, it's not even the tip, it's just a few micrometers of the tip."