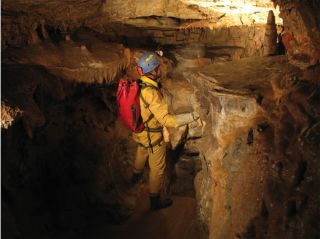 In the dark abyss of the world's deepest known cave lurks a newfound species of primitive eyeless insect, one that researchers are calling the deepest land animal ever found.

The creature, now known as Plutomurus ortobalaganensis, is one of four newly discovered species of wingless insects called springtails, which commonly live in total darkness in caves, where they feed on fungi and decomposing organic matter.

The insects were collected during the Ibero-Russian CaveX team expedition to the world's deepest known cave during the summer of 2010. The cave, Krubera-Voronja, is located in Abkhazia, a remote area near the Black Sea in the mountains of Western Caucasus, and reaches a depth of 7,188 feet (2,191 meters) below the surface.

"The CaveX team has been exploring this cave for more than 10 years, hard and dangerous work in a remote area inside the mountains," said researcher Sofia Reboleira, a cave biologist at the University of Aveiro in Portugal, adding that temperatures inside the cave range from 32.9 to 41 degrees Fahrenheit (0.5 to 5 degrees Celsius).

"Everything needs to be carried to the mountains and then through all the cave," including more than 1.24 miles (2 kilometers) of rope and 800 cave anchors, Reboleira told LiveScience. "There are no machines, only human work. At the base camp we have no freshwater, only melted snow, and the food has to be rationed to feed almost 30 persons during 30 days. Searching for cave-dwelling animals is a task that requires several hours of active search — extremely difficult in the cold conditions of the cave, because of the risk of hypothermia."

Until now, the deepest known terrestrial creatures were a scorpion and an insect known as a silverfish, found about 3,020 feet (920 meters) below Earth's surface in a cave in Mexico. P. ortobalaganensis was discovered at a depth of about 6,500 feet (1,980 m) below the surface, and trapped using cheese as a lure.

"P. ortobalaganensis has no eyes and long antennae," said researcher Enrique Baquero, a taxonomist at the University of Navarre in Spain. These features are typical of troglobionts, or cave dwellers. "Nevertheless, it has pigment, usually absent in animals that are strict troblobionts." (The creature has a grayish body covered with darker spots.)

Baquero speculated that P. ortobalaganensis only reached such low depths recently. This would explain its lack of extreme adaptations to that depth. For instance, the organism has not yet lost its pigment as many cave creatures have. Coloration helps protect against the sun, show off to mates and camouflage against predators and prey on the surface, but is pointless in lightless caves.

The discovery of such organisms in the total absence of light and with little food available changes our views of the life deep underground on Earth. "It seems to be richer than we thought," Reboleira said.

The scientists detailed their findings Feb. 22 in the journal Terrestrial Arthropod Reviews.