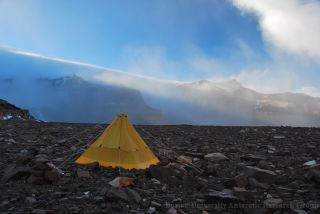 From the months of October through February, around 1,000 scientists are joined by several thousand support staff to study, catalog and explore the icy, pristine setting of Antarctica.

Even for just a short mission to the southernmost continent, plenty of planning has to happen. Planes can only fly to Antarctica in the southern summer, because jet fuel freezes in the cold.

About six months ahead of a scientific expedition, with funding in place, a research team puts together a support information package –a 60-page document outlining who the team members are, the training they need (or have), and the equipment that will be needed to complete the research. The research base on Antarctica, McMurdo Station, is operated by the United States Antarctic Program, a branch of the National Science Foundation.

He blogged about his experiences, and told OurAmazingPlanet that the level of planning involved was surprising. In addition to the required cold-weather training, Hayden also had to schedule and plan an environmental impact training.

"The erosion rate where we work is 5 centimeters per million years, so anything you do is just going to be there for millions of years. We were trained in how to minimize impact: If we disturb rocks, put them back in the same exact spot, even in the original orientation," Hayden said, adding, "We ship out all our waste, and I mean all the waste."

Hayden said that after the trainings were planned, the team had to request things like helicopter pickups and drop-offs for the research site, and special storage space for the rocks and ice they were bringing back to study in the lab.

"We request all the little things we need, down to the rolls of duct tape and batteries," he said. "Pretty much we have the whole season planned out in this document, which is definitely a challenge because we're not going for another seven months."

When the permits are granted and the various requests in place, the team members all have to get thorough medical and dental exams. Since there is little medical help on the base and the research site, the team needs to be in top shape before they fly down.

After that, each member fills out a gear request for special warm jackets, gloves and hats supplied by the U.S. Antarctic Program. [Extreme Living: Scientists at the End of the Earth]

When the time finally arrives for departure, all Americans doing research at the southernmost reaches of the Earth fly from Los Angeles to Auckland, New Zealand, and then to Christchurch where they pick up gear and catch a smaller plane for the 5-hour flight to McMurdo. The planet flight presents its own challenges.

"Since we're flying commercial, we get the carryon and two checked bags," Hayden said. "That's certainly not enough to carry all your science gear. So usually by two months out, you have to pack up all your gear and send it via boat."

The researchers have to predict exactly what they'll need many weeks in advance, and make sure it arrives on time in Antarctica. In the case of the team Hayden worked with, the scientific equipment was delayed, but eventually made it.

Hayden says that despite all the months of meticulous planning, it's still a thrill to be part of the grand scientific enquiry happening at the southern tip of the world.

"The whole program down there felt like a modern space race. There was this spirit of collaboration where everyone was excited to be part of this program, helping further exploration and science," Hayden said.

He is starting the process to return for another summer season researching the valleys.