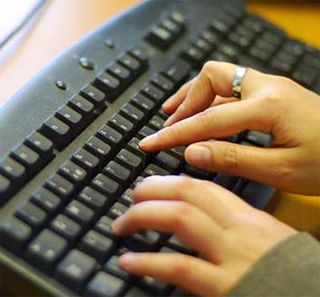 Take this with a wink and a LOL: IM is more formal than you might think. But hey, guys, your punctuation stinks. ((ImgTag||right|null|null|null|false))

Instant messaging (IM) is a relatively new form of communication, in which two people exchange typed messages instantaneously over the Internet. Although written, the fact that IM is more immediate and direct than email makes it seem more like speech than writing.

But a recent study of IM-ing by college students found that the communication was more formal - in use of vocabulary and abbreviations - than might be expected in a speech-like medium. The research also uncovered significant differences in how men and women use the medium.

"The most important finding is that IM by college students does not look like bad writing," said Naomi Baron of American University.

Baron reviewed 23 different conversations and surveyed 158 students. When divided along gender lines, the messages between females were more formal - with fewer contractions and better punctuation - than those between males.

Overall, though, the messages surprised Baron with their level of linguistic sophistication - considering that IM gives the impression that it is something you do "as fast as you can," she said.

There has been a recent interest in how teenagers use IM - infusing it with the newest lingo and emoticons - as in the ubiquitous smiley face :-).

"I had anticipated from what I had read in the popular press about teenagers that the students' IM would be full of acronyms and abbreviations," Baron said.

Baron presented her results last month at the annual meeting of the American Association for the Advancement of Science. She thinks the more writing-like style found in her data may be because the average college student - as opposed to the average teenager - is less concerned with appearing hip to his or her peers.

"Teenagers want to strut their language," Baron explained, whereas the typical young adult probably finds it takes too much effort to remember what the currently cool acronyms are, or how to make a particular emoticon.

There were also just 121 misspelled words. "I will have more misspellings in the papers my students turn into me," Baron said. "And you have to remember there is no spell check on IM."

The level of formality was higher among women than men. In places where a contraction (like "don't") could be used, a female IM-ing another female only used the contraction 57 percent of the time.

"I would have expected 90 percent of the time," Baron said. "The females are using a more schooled, standard writing style."

Guys used contractions 77 percent of the time, and their responses were often shorter than those of the women.

This is not to say there were no informal, speech-like aspects to the gals' messages. For example, it took two women on average 41 seconds and nearly 10 exchanges to close a conversation. This is similar to the prolonged goodbyes that characterize face-to-face communication.

Men, perhaps not surprisingly, ended their IM sessions more than twice as quickly.

The study also found that most of the students multitask - searching the web, playing games, eating, studying - while instant messaging. Perhaps you have an IM conversation going as you read this.

"Adults do a little multitasking," Baron said. "But students have raised multitasking to a fine art."

They also carry on multiple IM conversations at the same time. The average was 2.7, and some students have 12 conversations going simultaneously.

"One of the students said that IM is language under the radar," Baron said.

Like music playing in the background, the students do not put all of their attention into IM, Baron surmised. If that's the case, they must have subconscious spell-checkers.

The write way to say it

There are as many emoticons as there are emotions, and then some. Here is a tiny sample: