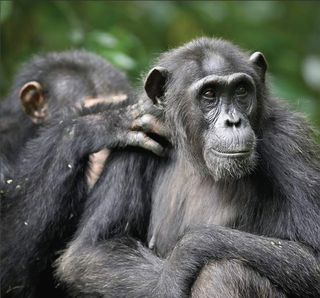 Imoso, the highest-ranking male in the Kanyawara community of Kibale National Park, Uganda, grooms Outamba, a middle-aged female. Male chimpanzees at Kanyawara consistently prefer the oldest females in their community as mating partners, suggesting that the preference that human men exhibit for youthful women is a recent evolutionary phenomenon.
(Image: © Jean-Michel Krief)

It should come as little surprise that humans are better than apes at learning social skills. But now scientists have shown that even toddlers are better at following directions than their grown-up ape relatives. The research shows that sophisticated social learning skills are a distinctly human trait.

Researchers put 230 subjects—including 100 chimps, 100 2-year-old children and 30 orangutans—through a battery of tests of their physical cognitive skills and their social learning skills.

"We compared three species to determine which abilities and skills are distinctly human," said study leader Esther Herrmann of the Max Planck Institute in Germany.

(Toddlers were used for the comparison with adult apes because they are thought to have comparable physical skill levels, but have not been taught as much as older children.)

While all three groups performed similarly in terms of their physical cognitive skills (such as the abilities to understand space, quantity and causality), the human children soundly beat the apes when it came to social learning skills.

In one test, for example, a researcher would demonstrate how to pop open a plastic tube to get at food or a toy hidden inside. The children watched and copied the researcher, while the chimps and orangutans ignored the directions and instead tried to break open the tube or pull the surprise out with their teeth.

"Social cognition skills are critical for learning," Herrmann said. "The children were much better than the apes in understanding nonverbal communications, imitating another's solution to a problem and understanding the intentions of others."

The study is detailed in the Sept. 7 issue of the journal Science.