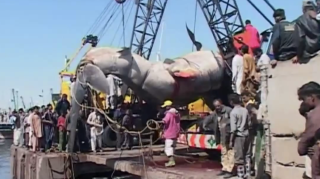 Two cranes pull a whale shark onto a pier in Karachi.
(Image: © Screengrab via ITNNews )

Video of a dead whale shark being pulled from the sea off of Pakistan raises more questions about the school-bus-size fish's demise than it answers, scientists say.

Pakistani newspaper The Express Tribune posted video on Tuesday (Feb. 7) of a crane hauling a whale shark carcass onto a pier in Karachi. According to the newspaper, the owner of the nearby Charai Fishery, spotted the animal floating "unconscious" 10 days earlier, 93 miles (150 kilometers) from the fishery. [See video of whale shark]

But sharks don't fall unconscious, said Bob Hueter, the director of the Center for Shark Research at Mote Marine Laboratory in Florida. And if they stop swimming for any reason, they aren't likely to bob along with the currents.

"If and when they die, they don't float, they sink," Hueter told LiveScience. "So to have one just kind of wash up is very rare. I can only think of a few cases over the years around the world where this is happened."

It's impossible to tell from the video and news stories what really happened to the whale shark, said Jennifer Schmidt, a biologist at the University of Illinois at Chicago who studies whale sharks.

"It's possible the shark was sick, and was brought into port when it finally appeared to be dead," Schmidt told LiveScience. "It's also known, however, that Pakistan hunts whale sharks, so it's possible this is a cover story for a whale shark hunt that couldn't avoid notice."

The shark, a member of the largest species of fish on Earth, was reportedly about 40 feet (12 meters) long and required at least three cranes to pull it onto the pier, after which it was sold for 200,000 rupees, approximately $2,200 (earlier reports had pegged the price at 1.7 million rupees). According to the Dawn newspaper, the buyer will put the animal on display for fee-paying viewers for three days and then sell the meat to poultry-feed producers.

Whale sharks are listed as "vulnerable" by the International Union for Conservation of Nature, but it's up to individual countries to enforce limits on killing the creatures.

From the photos, Schmidt guessed that the shark was a male. At 40 feet long, she said, he would have been about 30 years old and of breeding age.

"The death of an adult breeding animal is unfortunate under any circumstances, as his valuable contribution to shark numbers and genetic diversity is lost," she said. "Recent studies have shown that known whale shark populations, at least in some areas, are shifting toward smaller animals not old enough to breed. This suggests the larger reproducing sharks are being selectively depleted, likely targeted by fisheries, which will further endanger the status of whale sharks if reproduction declines."

Whale shark meat is eaten around the world, and the animals' fins, like those of many sharks, are expensive delicacies in Asia. But if the shark did indeed die long before fisherman found it, it's unlikely that it would be fit for human consumption.

"Decomposition is very rapid in an animal like that, and sharks, on top of that, have high levels of these ammonia-type substances in their tissues," Hueter said. "When they start to rot, it's pretty bad."