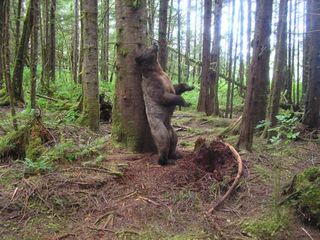 A grizzly bear rubs up against a tree to mark his scent, one scientist thinks.
(Image: © Copyright Owen Nevin)

Grizzly bears that rub their backs against trees aren’t trying to scratch that unbearable itch.  They’re actually doing it to communicate with each other, one scientist says.

Researchers have suggested many theories as to why grizzly bears get cuddly with trees. Some thought females might do it as they became most fertile, while others thought that bears might just be giving their backs a good scratch or trying to cover them in sap to use as insect repellant.

But a new two-year study of grizzlies in British Columbia used digital cameras to collect data on which bears used the trees for rubbing and when (bears use the same rub trees for generations, so it's easy to know which trees to watch). Satellite equipment also helped track the movement of individual bears.

"The cameras show that adult male bears are the most likely to rub trees, and the satellite telemetry tells us that males move from valley to valley in large loops, marking trees as they go, while looking for breeding females," said ecologist Owen Nevin of the University of Cumbria, who conducted the study.

Nevin, who will present his findings at the Sept. 10 annual meeting of the British Ecological Society, thinks that by marking the trees with their scent, the male bears get to know each other better, which could reduce fighting among the bears over female mates.

"Big male bears can seriously injure or even kill each other when they get into a fight," Nevin said. "If one recognizes the other from the scent marks on the rub trees in the area, he knows he's in for a tough fight—he's on the other guy's patch so to speak—so it might be better to back away than make a serious challenge."

Cubs have also been observed rubbing trees when a male is trying to chase them away from their mother (male bears will sometimes kill a female's offspring to get a chance to mate with her).

"They can visit the tree two or three times a day, sometimes within an hour of the big males, so it may be that smelling like him makes them safer—related animals smell similar and animals are less aggressive toward relatives," Nevin said.