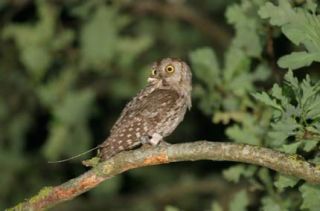 Male scops owl holding a captured moth in its beak. Males are ringed (on the left tarsus) and equipped with VHF transmitters (on the right tarsus) for identification and localization.
(Image: © Jacques Auger)

Cellular phones can be used to talk with owls in the wild, researchers now find.

Beyond phone calls consisting entirely of "Who?" placing networks of cell phones in the wild could help call to and listen for birds and beasts, enabling researchers to study faraway wildlife in their natural habitats.

"We're in talks to set up such networks in Costa Rica, Sri Lanka and Papua New Guinea," researcher Dale Joachim, an MIT electrical engineer, told LiveScience. "It might be good for ecotourism, to hear the richness of sound there."

Currently, wildlife biologists monitor birds and beasts by repeatedly venturing into the field to call out and listen for responses. "It dawned on me that could in part be automated," Joachim said.

Joachim, with biologist Eben Goodale and colleagues, first tested phones in the wild last year by wandering for a few hours around midnight in the woods of northeastern Connecticut, rigging phones for owls in autumn.

The researchers employed cell phones modified to listen via microphones and "talk" via loudspeakers. The team next placed calls to the phones using a Web site that plays library audio clips of the barred owl (Strix varia) and Eastern screech owl (Megascops asio). Joachim had some familiarity with the avian world as he kept owls and raptors as pets when he was young. These were injured birds that he nursed back to health.

Despite concerns that cell phone audio quality was too poor for calls, the researchers found the owls responded just as well to hoots and trills over mobile phones as those played back on CD players. The phones also generally picked up calls from owls well, too.

In the future, Joachim said, "you could imagine listening to the sounds of birds from remote areas in your office over the Web, instead of music." In the meantime, the state of Maine plans to deploy such cell phones in an annual survey of owls beginning in March 2008.

Joachim and Goodale detailed their findings online on Aug. 22 in the journal Biology Letters.