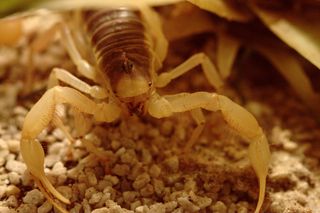 The shell of a fat-tail scorpion could lead to new ways to shield machinery.
(Image: © Dinko Srkoc on Flickr)

The armor a desert scorpion evolved to survive harsh sandstorms has inspired a new way to protect the moving parts of machinery from wear and tear.

The grinding and scraping caused by particles of dirt and grit in the air, water and other fluids eroding the surfaces of helicopter rotors, rocket motor nozzles, turbine blades, pipes and other mechanical parts is one of the primary causes of equipment failure, leading to millions of dollars of damage each year.

Filters can help remove these abrasive particles, but they have to be replaced or cleaned often to remain useful. Researchers have therefore sought to develop better erosion-resistant surfaces, using the yellow fat-tail scorpion (Androctonus australis) – a native of the Arabian and Saharan deserts – as a model.

The investigators first analyzed the back of the creature with a 3D laser-scanning system. It was somewhat difficult to scan the scorpions — "the scorpions were alive when scanned," recalled Wen Li, a materials scientist at Jilin University in China. (The scorpions were anesthetized with ether.)

[Why the Full Moon Makes Scorpions Glow In the Dark]

The researchers next developed a computer model to see how sand-laden air behaved around bumps and grooves on the scorpion's back. Based on their findings, the researchers created surfaces with a variety of similar bump-and-groove patterns to see which performed best against sand-laden wind.

The scientists discovered the rotating flow of air across the grooves created a cushioning effect. A series of small grooves at a 30-degree angle to flowing gas or liquid gave steel surfaces the best protection from erosion.

"It is not very hard to practically apply our research for improved erosion-resistant surfaces," said Zhiwu Han, a materials scientist at Jilin University in China. "We are engaging in the practical application for these findings with a blower factory located in Jilin province."

Han, Li and their colleagues detailed their findings online Dec. 30 in the journal Langmuir.