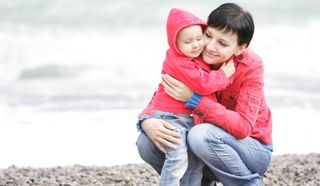 Nurturing a child early in life may help him or her develop a larger hippocampus, the brain region important for learning, memory and stress responses, a new study shows.

Previous animal research showed that early maternal support has a positive effect on a young rat's hippocampal growth, production of brain cells and ability to deal with stress. Studies in human children, on the other hand, found a connection between early social experiences and the volume of the amygdala, which helps regulate the processing and memory of emotional reactions. Numerous studies also have found that children raised in a nurturing environment typically do better in school and are more emotionally developed than their non-nurtured peers.

Brain images have now revealed that a mother’s love physically affects the volume of her child’s hippocampus. In the study, children of nurturing mothers had hippocampal volumes 10 percent larger than children whose mothers were not as nurturing. Research has suggested a link between a larger hippocampus and better memory.

"We can now say with confidence that the psychosocial environment has a material impact on the way the human brain develops," said Dr. Joan Luby, the study's lead researcher and a psychiatrist at the Washington University School of Medicine in St. Louis, Mo. "It puts a very strong wind behind the sail of the idea that early nurturing of children positively affects their development."

The research is part of an ongoing project to track the development of children with early onset depression. As part of the project, Luby and her colleagues previously measured the maternal support that children — who were ages 3 to 6 and had either symptoms of depression, other psychiatric disorders or no mental health problems — received during a so-called "waiting task."

The researchers placed mother and child in a room along with an attractively wrapped gift and a survey that the mother had to fill out. The children were told they could not open the present until five minutes had passed — basically until their mothers had finished the survey. A group of psychiatrists, who knew nothing about the children's health or the parents' temperaments, rated the amount of support the mothers gave to their children.

A mother who was very supportive, for example, would console her child, explaining that the child had only a few more minutes to wait and that she understands the situation was frustrating. "The task recapitulates what everyday life is like," Luby told LiveScience, meaning that it gives researchers an idea of how much support the child receives at home.

Though 95 percent of the parents in the study were the children's biological mothers, the researchers say that the effects of nurturing on the brain are likely to be the same for any primary caregiver. [Why Gay Parents May Be the Best Parents]

Luby and her team will continue following the children as they grow older, and plan to see how other brain regions are affected by parental nurturing during preschool years.

"It's now clear that a caregiver's nurturing is not only good for the development of the child, but it actually physically changes the brain," Luby said.

The study was published online today (Jan. 30) in the journal Proceedings of the National Academy of Sciences.