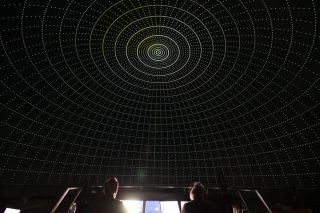 Giant screens that wrap around an audience and combine hypervisual detail with effects such as wind and heat could allow theatergoers to visit distant locales without ever leaving their seat.

Currently, 1,000 planetariums worldwide are partaking in a digital transition that could transform the film-watching experience. Dome theaters that easily out-dunk IMAX in resolution and that can utilize the latest scientific data could help take interactive films to a whole new level.

"We've got an enormous amount of pixels around people's heads. So because it surrounds them, they believe they're in space. They believe they're travelling around the universe. This is education in an informal and entertaining way," said Martin Howe, chief executive of leading digital dome technology company Global Immersion.

"Once we convert [existing theaters] to digital, we can not only fly people around the universe, we can show them many other things … We can take people across the whole planet and look at data that’s only a day old. We can do that live," Howe said.

Existing planetariums use optical starballs designed 30 years ago or more to shine very precise pinpricks of light onto a screen from the middle of the theater. While that setup works very well to approximate a rotating night sky, it has limited functionality.

But shows informed by live data collected by institutions like the National Ocean and Atmospheric Administration (NOAA) could take audiences on atmospheric, undersea and Alpine expeditions to experience climate change for themselves.

Ambient effects such as water spray and smells complete the immersion experience for tours of Yosemite National Park, the Egyptian pyramids and potentially an endless number of times and places.

The system relies on a powerful network of media servers, Howe said, to crank out eight times more pixels than the latest digital cinema and process the optical blending necessary for a 20-projector array to produce a continuous image on screens that overlap a dome up to 80 feet in diameter.

The enormous screen size requires more images per second for the eye to read, say, a galloping horse as a smooth, rather than choppy, motion.

"Most of our systems we have installed recently can run at 60 frames per second. Which is what James Cameron is advocating for," Howe said.

Though less than 10 percent of museums and planetariums globally have made the switch, newly cost-effective technology and increasingly bright projectors have resulted in a 50 percent growth in market interest over the last two years, Howe said.