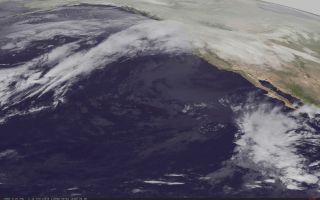 The storm system that brought so much snow to Seattle, as seen on Jan. 18.
(Image: © NOAA/NASA.)

A "perfect recipe" for snow hit the Pacific Northwest today, one meteorologist said, bringing nearly a winter's worth of snow to Seattle in a matter of hours.

Seattle — not exactly the snowiest place on Earth — has turned completely white from the flakes. The metro region got slammed with 4 to 8 inches (10 to 20 centimeters) today (Jan. 18). Schools were closed and flights were canceled throughout the region as Seattle battled whiteout conditions — a forceful departure from the wimpy winter the country has had so far this year. At Sea-Tac Airport, 4 inches (10 cm) of snow has fallen, nearly the total amount of snow that falls in an average winter here. Seattle's snow will continue into tomorrow (Jan.19), according to the National Weather Service. But so far, the storm has dumped the most snow south of Seattle.

Cold air blowing south from Alaska — where snow records have fallen recently — has combined with a low-pressure system blowing all the way in from the Philippines to create eye-popping snowfall.

"It was just a perfect recipe to get heavy snow in Seattle and especially south of Seattle," said Dave Samuhel, a meteorologist with AccuWeather.com.

Earlier in the week, the moisture-laden low-pressure system appeared to be heading right for Seattle, but "the cold air kind of deflected it to the south of Seattle," Samuhel told OurAmazingPlanet.

"That's very impressive for down there," Samuhel said.