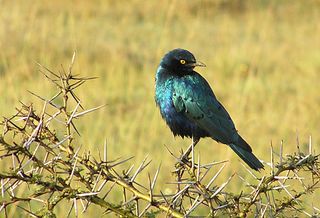 The lesser blue-eared glossy starling (Lamprotornis chloropterus) lives in savanna woodland habitat throughout West and Southern Africa, as well as parts of East Africa. It is a cooperative breeder that, despite its name, is not as closely related to the greater blue-eared glossy starling as people have long suspected.
(Image: © Dustin Rubenstein/University of California, Berkeley)

Birds back each other up on child care when times get tough, just like family and friends do in numerous other species, a new study finds.

In African savannas, rainy and dry seasons can vary drastically from year to year, so the local starlings pitch in and help each other raise a family moreso than birds that live where rainfall is predictable, according to research detailed in the Aug. 21 issue of the journal Current Biology.

The discovery might help explain why some species of mammals, insects and birds living in erratic environments rear their young with the help of more than just two parents. The all-hands-on-deck tactic, called cooperative breeding, can call on the parenting skills of siblings, nephews, nieces, cousins and even unrelated young.

"When you don't know what conditions you will be facing in the next breeding season, it pays—in an evolutionary sense—to live and breed in family groups because more chicks survive over the long haul," said study author Dustin Rubenstein, an evolutionary biologist and behavioral ecologist at the University of California, Berkeley. He conducted the research while doing his Ph.D. work at Cornell University.

For the past 20 years, scientists have known that cooperative breeders often live in the dry regions of Africa and Australia. But until now there has been no consensus as to why these geographic locations were associated with more help-oriented family groups.

Rubenstein says the African starling study suggests birds breed cooperatively in the variable wet and dry seasons of the savanna, because "it allows for both reproduction in harsh years and sustained breeding during benign years."

When the rainfall patterns favored breeding, the birds bred for longer and laid more clutches of eggs. Yet even during bad breeding conditions, the cooperative breeders were more successful at rearing chicks than the two-parent nests.

The research may help predict how animals will adapt to Earth's changing climate.

"By studying how animals have already adapted to unpredictable environments, we may get an idea how behavior could change in the future—including our own," Rubenstein said.