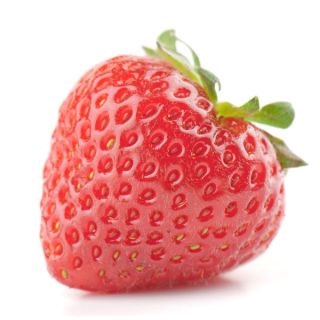 The complex mix of chemicals in the aroma of strawberry has confounded flavor chemists. As a result, there is no good substitute for the real thing.
(Image: © ravl | shutterstock)

DAVIS, Calif.— Artificial strawberry flavor doesn't quite measure up to the real thing. It's not about taste; both are sweet. It's the distinctive strawberry aroma that's the problem.

The term "flavor" encompasses multiple things: taste, physical sensation in the mouth and smell. Appearance and sound, as in crunchiness, can also contribute. The options for taste — there are five of them accepted by science — and mouth feel are limited, but aromas are not, and they typically dominate our perception of flavor. [How Scientists Solve Flavor's Language Problem]

Strawberry aroma, which greatly influences what a strawberry tastes like, has been a tough one for flavor chemists, according to Susan Ebeler, an analytical chemist at the University of California, Davis.

"We don't have a good handle on what really is responsible for strawberry aroma, that is why there are no good artificial strawberry flavors, because it is such a strong, complex mixture," Ebeler said.

Strawberry aroma appears to be a mix of many compounds, and identifying all of them, their concentrations and how they interact with other substances in a strawberry has created a puzzle for flavor chemists, according to Ebeler.

She specializes in wine flavor. Among wines, certain grape varieties, such as muscat and Riesling, have aromas with unique and fairly well understood chemical profiles. However, others, such as chardonnay and cabernet, are much more challenging. Food is a similar, mixed story, according to Ebeler.

Flavor scientists have had some success mimicking banana and vanilla. These artificial aromas rely on single compounds that have an aroma similar to that of the actual bananas and vanilla bean. However, the artificial version lacks the full chemical complexity of the real thing.

"That is what we don’t always know, what are all the other things that give that richness and how can we still tell that difference," Ebeler said. "We can pretty easily say that is vanilla, but what is the chemistry behind the real vanilla that smells so much better to us?"

Aroma is particularly tricky to study because it isn't determined simply by the chemicals present in the air above a glass of wine.

Some compounds can mask others, or they can interact synergistically so the brain reads them as a new aroma. For instance, ethyl butyrate, a chemical in grapes, smells like artificial fruit on its own, while another chemical produced during wine fermentation, diacetyl, has a butter aroma. When combined the two chemicals turn into something else: butterscotch.

This happens because the brain process the two combined aromas as a distinct, third aroma.

"There is no way you could predict that that would happen, and that would be very hard to sort out from a chemical profile," Ebeler said.

There are other factors as well. The components of the wine itself can affect the volatility (how easily they evaporate) of certain compounds, and so alter the aroma we perceive. And the concentration of molecules responsible for an aroma must pass certain thresholds for our noses and brains to be able to detect and recognize it, for example.

In her lab, Ebeler has instruments designed to investigate these kinds of phenomena. A machine, called a gas chromatograph olfactometer, separates out compounds in a substance, in part by boiling point. It has a port that allows someone to smell the compounds as they are released. A joystick allows the smeller to record when his or her nose picks up on something and how intensely. Another instrument, a mass spectrometer, provides information about the mass and structure of molecules in a compound.

Specialized detectors in the lab can pick out specific types of compounds, such as those with sulfur or nitrogen in them. Ebeler herself also works to develop new methods to measure chemicals responsible for aroma, like compounds known as pyrazines.

She collaborates with colleagues in Hildegarde Heymann's lab, where panels of trained volunteers describe and rate wines' attributes. Using both descriptive and chemical data, they try to tease out the relationship between the wine's attributes, and compounds in it.