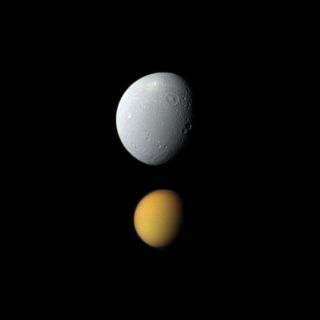 Saturn's largest moon, Titan, appears deceptively small paired here with Dione, Saturn's third-largest moon, in this shot snapped by NASA's Cassini spacecraft on Nov. 6, 2011. Titan is much farther from the spacecraft than Dione is in this view. The view was captured at a distance of approximately 684,000 miles (1.1 million kilometers) from Titan but only about 85,000 miles (136,000 km) from Dione.
(Image: © NASA/JPL-Caltech/Space Science Institute)

NASA's Cassini spacecraft has captured stunning shots of three of Saturn's moons, showcasing the diversity and beauty of the ringed planet's natural satellites.

The Cassini probe recently beamed home photos of Titan, Dione and Enceladus, three of Saturn's six largest moons. The giant planet has 62 known satellites, but most of them are small, rocky moonlets too small to be rounded by their own gravity.

One of the newly released photos shows Titan passing in front of Saturn and its rings. Titan is the ringed planet's largest satellite; at 3,200 miles (5,150 kilometers) wide, it's nearly 1.5 times bigger than Earth's moon.

Titan has a thick, nitrogen-rich atmosphere that shrouds the frigid body in a soupy brown haze. Complex organic molecules — the carbon-containing building blocks of life as we know it — swirl about in this atmosphere.

The huge moon also has a hydrocarbon-based weather system, with methane rain falling from the sky and pooling in liquid-methane lakes. Astrobiologists speculate that Titan may be one of the best places in the solar system to search for life beyond Earth.

Another of Cassini's new photos shows Dione, an icy, pockmarked globe 698 miles (1,123 km) across. The moon's leading hemisphere is heavily cratered, while its trailing one sports an intricate web of ice cliffs.

Cassini also snapped a stunning new photo of Enceladus. At 319 miles (513 km) across, Enceladus is Saturn's sixth-largest moon — but it may be the gas giant's most intriguing satellite.

Icy geysers erupt from Enceladus' south polar region, fueled by a powerful interior heat source of mysterious origin. And scientists think an ocean of salty, liquid water lurks beneath the moon's icy crust, making Enceladus another key target in the search for alien life in our solar system.

Cassini launched in 1997 and arrived at Saturn in 2004. It has been studying the ringed planet and its many moons ever since, and will continue to do for years to come. Last year, NASA extended the probe's mission to at least 2017.