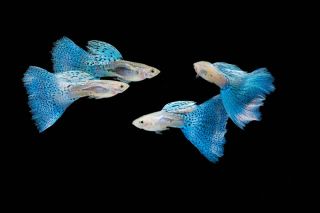 When male harassment starts getting to female guppies, they end up taking their frustrations out on other females by spending less time with them and behaving more aggressively.
(Image: © Anson0618 | Shutterstock)

"Males will harass females for an opportunity to reproduce with them. This harassment can have a negative impact on females," study researcher Safi-Kristine Darden, of the University of Exeter in southwestern England, told LiveScience.

The study finds that because of this harassment, "a female that is nonreceptive, that isn't interested in mating, will prefer to swim next to a female that is more sexually attractive," Darden said.

What makes a female "attractive" is a chemical called a pheromone she emits when she is fertile, which occurs about three days every month. The rest of the time she is "nonreceptive" to mating; that doesn't stop male suitors, though, since she can store sperm for later use.

"If males are given the choice they prefer the females who are releasing this pheromone," Darden said. "If there are two nonreceptive females, he would still make sexual advances to them."

These male guppies will harass females into mating by using nipping and chasing behaviors. This harassment stresses out the female guppies and distracts them from searching for food and defending themselves against predators. Previous studies have shown that the presence of a sexually harassing male can disrupt female social structure among guppies, causing "cat fights."

Harassment in the fish tank

The researchers then looked to see if females naturally chose this partnership. A receptive and a nonreceptive female were placed in clear tubes in a fish tank. Then a third fish, a nonreceptive female, was plopped in the tank, and the researchers watched for how much time she spent near each of the other females. The guppy preferred the company of the attractive fish. Fertile guppies didn't show a preference.

In a third experiment, they replaced the actual fish with water from the tank where a fertile female fish had been; pumping this water into one end of a tank containing a nonreceptive female. They found that she still lingered longer by end of the tank with water from the fertile fish, suggesting she could sense the pheromones released, and wanted to be near the more attractive female.

In the wild, guppies are constantly flitting from one social group to another. The males search the groups for new, receptive mates based on scent. Females also flit between fish, but they have "favorite" social partners they spend more time with than others. Though seemingly superficial, the distinct pairs that females form can improve foraging and provide protection from predators.

The researchers think that leaving this preferred social group to pair with a receptive, "attractive" female for protection may be negative in some ways to the guppies, though it works to deter the harassing males. The next round of studies will see if this partner-switch impacts the guppies' social bonds with other females.

The study was published this week in the journal Proceedings of the Royal Society B: Biological Science.