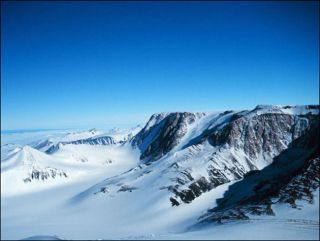 These peaks of the Transantarctic mountain range may have been shaped by a major geological event.
(Image: © NOAA)

The origins of the highest peaks in Antarctica have long been shrouded in mystery. Now researchers suggest they are remnants of a gigantic high plateau that collapsed as the earth tore apart.

The frozen continent of Antarctica was the last explored by humanity. The mysteries lurking at its heart inspired the pioneering horror writer H.P. Lovecraft to imagine "Mountains of Madness" there in the 1930s higher than the Himalayas, "pylons of a frightful gateway into forbidden spheres of dream, and complex gulfs of remote time, space, and ultra-dimensionality."

Although less fantastic, the Transantarctic Mountains remain striking. They make up one of the longest mountains chains in the world, stretching more than 2,200 miles (3,500 kilometers) across the entire length of the continent, and can reach heights more than 4,500 meters, or more than 2.5 miles tall, a little more than half the height of Everest (8,848 meters).

The world's highest mountain ranges typically formed when massive tectonic plates crashed against each other. However, the Transantarctic belt apparently emerged as the Earth's crust rifted apart, geologists have agreed for years. But mountains that form as a result of such rifting, such as the foothills of the Red Sea, are not supposed to rise anywhere as high as they do in the Transantarctic range, leaving scientists arguing for decades over how these peaks arose.

Now Studinger and his colleagues suggest this Antarctic mountain range is the remnant edge of a gigantic plateau the size of France that was roughly 2 miles (3 kilometers) high or more. In other words, these peaks are high now because they were already high long ago.

The findings are detailed in the August issue of the journal Geology.

Decades of data regarding Antarctica were combined with new observations. For instance, Studinger and his colleagues flew in airplanes over the continent measuring, among other things, the gravity field of the Earth, which varies over the planet's surface depending on how much rock is concentrated underneath a given point. Such information sheds light on the continent's geology.

The scientists compared all this data with known processes of mountain formation to discover the best explanation behind the Transantarctic Mountains.

They propose the interior of this conjectured plateau collapsed somewhat like a failed soufflé.

"This is something that commonly happens because the plateau's interior gets too hot. High, elevated plateaus eventually become unstable," Studinger said. "But the edges of such plateaus are probably cooler and thus stiffer, so they remain high."

The Earth's crust then began rifting apart some 105 million years ago, making the collapsed part of the plateau stretch, thin and sink further, leaving the peaks curving along the rim of a great plain. The ruggedness of the mountain chain then was further accentuated by glaciers that carved away rock.

"There's all kinds of information that has been published that has sometimes been known about for decades that support this idea," Studinger said. "For instance, we know streams in the Transantarctic Mountains have flowed in the other direction—we think that's because what was once high was low and vice versa."

While the Transantarctic Mountains would represent one shoulder of the rift, "we think the other shoulder is simply no longer there," Studinger said. "Antarctica was part of [the super-continent called] Gondwanaland, and when it broke away during the Mesozoic, we think this rift shoulder simply disappeared and is part of what is now New Zealand."

Understanding the origin of the Transantarctic is crucial for understanding how Antarctica came to be covered in glaciers.

"To understand the onset of glaciation in Antarctica, it's important to know when the mountains were there and how high they were," Studinger explained.