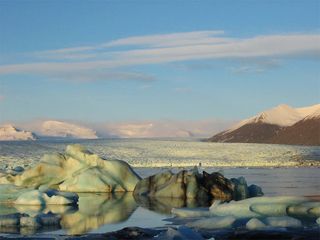 The Vatnajokull glacier is located in the southeast of Iceland. With its more than 3,000 square miles is the largest glacier in Europe.
(Image: © K. Cardon)

A mysterious dip in gravity over Canada has been a weighty topic for some scientists. Now satellite data reveal a thick ice sheet that once cloaked the region partially resolves this so-called gravitational anomaly. Scientists have known that the Hudson Bay region features lower gravity than surrounding areas. While two theories have emerged to explain the strange phenomenon, conclusive evidence has been elusive. One theory involved a change in the area's overlying glacial weight as the Laurentide Ice Sheet melted. The new results, reported in the May 11 issue of the journal Science, provide a crude map of the ice sheet’s structure as it was during the most recent ice age. Turns out, the now-melted ice left behind an imprint from which the Earth is still rebounding, and that imprint contributes to the weird gravity. "There are many uncertainties about the last ice age and its impact on the Earth," said one of the study’s researchers Jerry Mitrovica, a physicist at the University of Toronto. “We are able to show that the ghost of the ice age still hangs over North America." Tag team Mark Tamisiea of the Harvard-Smithsonian Center for Astrophysics in Massachusetts and his colleagues relied on gravity-hunting gear: Between April 2002 and April 2006, they collected data from the Gravity Recovery and Climate Experiment (GRACE). The twin GRACE satellites work by taking advantage of the fact that gravity’s pull on an area is proportional to the mass sitting atop that area. GRACE’s satellites fly in tandem, constantly keeping track of the distance between them while taking measurements of gravity’s tug. As the front flyer passes above an area of spiked gravity, the satellite feels and reacts to the pull before the one trailing behind. The tiny jolt changes the distance between the two satellites, and microwave finders can nail down the distance within one micron—slightly smaller than a red blood cell, or 2,000 times tinier than a pinhead. “If the Earth were a perfect sphere, gravity would be the same everywhere around the sphere,” Tamisiea told LiveScience. But the Earth is not a perfect sphere. It’s lumpy; mass is distributed unevenly both inside the Earth and on its surface. Thus, gravity varies over different regions. Missing gravity Past studies and theoretical calculations have searched high and low for the missing gravity. According to one explanation, convection within the Earth’s mantle tows the continental plate downward. The problem with this theory is that such a process occurs on the order of a million years or so and wouldn’t show up in the GRACE measurements as they detect only geologically “quick” gravity changes on the order of years. Another theory blames the anomalous gravity on glacial rebounding, which occurs on much shorter time scales. During the last ice age, the two-mile-thick Laurentide Ice Sheet stretched from the Arctic down through eastern Canada to the northern half of the Midwestern United States, spanning 5 million square miles. The massive sheet pressed down on the Earth, deforming the crust somewhat like a Sumo wrestler on a trampoline surface. Even though the icy cover has all but vanished, the Earth still feels the burden and like a slowly rebounding memory-foam pillow, it has yet to snap back to its ice-free shape. The gravity measurements reveal that the slight deformation could explain about 25 to 45 percent of the unusually low gravity that has persisted over a large section of Canada.   The rest of the “missing gravity” can be explained by some sort of mantle tugging, the scientists say. Two spots, to the west (Keewatin) and east (northern Quebec), showed greater gravity changes compared with surrounding regions, suggesting at least two large ice domes jutted up from the Laurentide Ice Sheet during the Late Pleistocene Epoch, Tamisiea said. The results will help scientists understand ice-sheet dynamics and how climate affects the mass and distribution of ice over the Earth. “Knowing there are the two domes gives us a way to put tighter constraints on how the ice sheet develops and evolves with changing climate,” Tamisiea said.