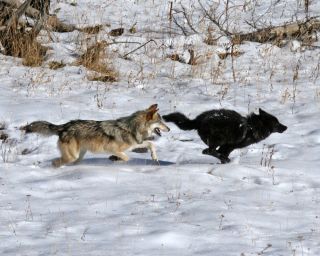 Environmental changes have a profound effect not only on animal populations but on traits of the animals themselves, in ways that are difficult to understand and predict, new research suggests.

By studying the wolves of Yellowstone National Park, a group of researchers has developed a new model for understanding how both ecological and evolutionary traits of an animal population change as the environment does.

The researchers recorded and studied data from Yellowstone for more than 15 years, including the body size and coat color of wolves as well as their sharply fluctuating population, which last year stood at 97.

"The conclusions that we have been able to draw is that biologists should stop treating population size independently of population characteristics. As the environment changes, it invariably changes the ecology and evolution of species," study researcher Tim Coulson, of Imperial College London, told LiveScience.

The study appears in the Dec. 2 issue of the journal Science.

An international group of wolf experts, geneticists and statisticians began collecting data from Yellowstone when, absent from the park for 70 years, wolves were reintroduced in 1995 and 1996. The reintroduced population of 40 grew to nearly 180 wolves within seven years. Then the population fluctuated before sharply declining starting in 2008.

Researchers put this data together with genetic information and other characteristics about the wolves.

"Biologists and people who study wild populations in animals have been noticing over the last decade or so [of studies] that when you change the environment around a species — climate change, introduction of new species, disease epidemics, etc. — you don't just change the size of the population, the number of individuals living there, you often change the characteristics of the animals," Coulson said.

"It’s a fairly general phenomenon, but they haven't had an ability to understand how and why it's occurred."

The researchers used statistics to determine whether years were "good" and "bad" in terms of the wolves' survival, growth and fertility rates. These were driven by environmental changes, including food availability, competition, disease and weather, Coulson said.

They used these survival rates to understand how these environmental conditions impact the various characteristics of the wolves. The researchers say they learned several big things, including that the population did worse when bad years came in series than when bad years were interspersed with good years.

"One bad year, yes, it has a short-term impact, but if you end up with a long string of harsh conditions, it's worse for the population in the long run," Coulson said. "We haven't got enough data to work out exactly what it is that makes one good year or bad year," he added, although availability of food and prominence of disease play roles.

The researchers also found that these changes can have varying, and even contradictory, effects on the life cycle of the wolves, or other animals being studied. "Survival, reproduction and individual growth are three key characteristics of a population, and they can all respond very differently to environmental change," study researcher Daniel MacNulty, of Utah State University, told LiveScience. "Depending on how they respond to change, it will influence the dynamics of the population."

The same model for how wolves react to changing environments can be used for other animals, and even insects and plants.

"Environmental change doesn't affect simply the ecology or the evolution of the population, it affects both of them simultaneously," MacNulty said. "Both ecological and evolutionary changes can happen rapidly and in a population that’s subject to environmental change."

For example, researchers could model rodents and other pests over time to determine how they might react to replacing a city green space with a parking lot. "You can't just assume that environmental change is going to lead a decrease in a population; they can increase as well," MacNulty said. "They may respond to a particular environmental change by leading to an overabundance of a particular pest species."