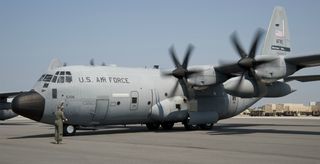 The 2011 Atlantic hurricane season, which officially ends today (Nov. 30), has kept storm-chasing aircraft busy this year. The planes spend hours at a time flying through tropical storms and hurricanes to capture crucial data for forecasters on the ground.

Seven hurricanes and 12 tropical storms swirled across the Atlantic region this year, making 2011 one of the most active seasons on record. For the majority of those 19 storms, aircraft took to the skies to investigate.

The main arm of the United States' weather-scouting fleet is the Air Force Reserve 53rd Weather Reconnaissance Squadron, based at Keesler Air Force Base in Biloxi, Miss. — better known as the Hurricane Hunters.

"We had a lot of business this year, but it was a good year because not much of that [severe weather] impacted Americans in a negative way," said Lt. Col. Sean Pierce, pilot and director of operations for the 53rd.

The Hurricane Hunters' workhorse is the massive WC-130J aircraft, a prop plane equipped with a bevy of weather-sensing instruments. There are only 10 of these aircraft on Earth, all owned by the 53rd. This year, one of the planes, all of which are close to 10 years old, was out for maintenance, so the squad was down to nine aircraft in what proved to be an active hurricane season. [Images: Hurricane Hunters in Action]

On a typical flight, which lasts more than 10 hours, the WC-130Js fly with a crew of five — two pilots, a navigator, a weather tech who deploys various instruments, and a meteorologist, who acts as flight director.

At least twice this year, aircraft were needed in up to three storms at once, "which is the most challenging environment for us operationally," Pierce told OurAmazingPlanet.

Hurricane Irene required some of the most flight time this season, and sent hurricane hunters farther north than usual.

During the final flight into the giant storm, a crew sent a dropsonde — a small, largely biodegradable weather sensor that travels aboard a tiny parachute — into the Hudson Bay, right near the Statue of Liberty, just as Hurricane Irene made landfall, Pierce said. Irene was the first hurricane to hit the United States in three years and caused more than $1 billion in damage.

The weather-sensing planes, at the behest of the NHC, take to the skies whenever tropical weather systems appear to threaten people or property. Hurricane-hunting crews fulfilled 127 of the 129 requests the NHC sent out this year for the Atlantic region, Pavone said, "which is a pretty high success rate, which is what we've come to expect from them over the years."

"Their data are critical to us," said Dennis Feltgen, meteorologist and spokesman for the NHC.

Feltgen said that over the ocean, where tropical weather systems originate, there's no infrastructure in place to monitor and record data for forecasters trying to predict what a storm will do.

"They are basically performing an MRI of the storm, and they give us an exact location; they're able to determine the structure of the storm and the strength of the storm," Feltgen told OurAmazingPlanet. "All that data is critical for going into the computer forecast models."

Despite a busy year for pilots and crew, 2011 proved to be a fairly lucky year for the United States — aside from the devastation wrought by Hurricane Irene.

"This year we had a lot of storms, but the majority of them ended up turning out to sea," said Lt. Col. Jon Talbot, chief meteorologist for the hurricane hunters. "The big picture is it was very fortunate we had one major impact to the U.S.," Talbot said.

Although the official Atlantic hurricane season draws to a close on Nov. 30 every year, storms don't always stick to human schedules. It's extremely rare, but hurricanes can form in December.

In fact, the NHC is currently tracking a suspicious area of rough weather that developed on Tuesday (Nov. 29) that has a slight chance of developing into a tropical cyclone.

Talbot said the Hurricane Hunters, like storms themselves, are undeterred by the date on the calendar.

"If it forms, we're out there taking care of it," Talbot said. "It doesn't matter what month it's in — we're ready to go."