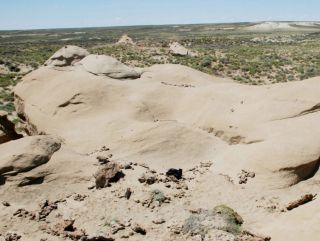 The "intelligent machine" was pretty successful at spotting fossil sites in the Great Divide Basin, a stretch of rocky desert in Wyoming.
(Image: © Courtesy of Robert Anemone)

The new fossil-hunting computer program relies on the fact it can learn and incorporate a broad swath of information from its "experiences" to know what to look for when scanning for fossil sites. As such, the intelligent machine has a big advantage over traditional methods, in which fossil-hunters often could only make educated guesses as to where fossils might lie — for instance, walking down dried-up riverbeds to look for bones that erosion might have uncovered on the slopes.

"So much when it comes to discovery of fossils is based on luck and serendipity," paleoanthropologist Glenn Conroy at Washington University in St. Louis told LiveScience. A team he led in 1991 discovered the fossils of the first-known — and still the only known — pre-human ape ever found south of the equator, in a limestone cave in Namibia.

"There's a lot of hard work and walking around in desolate places, too, but one has to be fortunate to find fossils," Conroy said. "Now we're trying to find a better way to do it, to increase the odds in our favor."

Now, using artificial neural networks — computer systems that imitate the workings of the human brain — Conroy and his colleagues have developed a computer model that can pinpoint rich fossil sites in the Great Divide Basin, a stretch of rocky desert in Wyoming spanning an area of 4,000 square miles (10,360 square kilometers).

"We're pointing to a new use of technology from the geographical sciences that can be really valuable for paleontology," researcher Robert Anemone, a paleontologist at Western Michigan University, told LiveScience.

The basin has proven to be a treasure trove for fossil hunters in the past, yielding early mammal fossils 50-million-to-70-million years old. Still, "working in an area this enormous is a logistical nightmare — it's very expensive to wander out all over the place, so getting leads would be helpful," Conroy said.

The researchers had the network analyze maps and satellite imagery of the Great Divide Basin, which included data on elevation, slope, terrain and many other landscape features. They also fed it details on 75 fossil-rich areas in the basin so it could learn how fossil sites in general might look, relying on factors such as color.

"The beauty and power of neural networks lie in the fact that they are capable of learning," Conroy said. "You just need to give them a rule to deal with things they don't know."

In tests last summer, when the system was shown maps of the basin with 25 different fossil-rich sites it had not seen before, it accurately identified 20 of these sites, and the sites it tagged all contained fossils. Further tests of the system on nearby Bison Basin in Wyoming, a site it had not been trained on, found it correctly identified four fossil sites scientists had previously spotted.

"That gave us encouragement, that a blind test based on a neural network for a different basin still gave us pretty good predictive results," Conroy said.

The research has spotted a number of potential new fossil sites. "In the summer of 2012, we're going to go to the Great Divide Basin and look at sites we've never been to before that our model predicts have a high potential to be good fossil localities," Anemone said.

The easiest and best place to start looking for other new fossil sites with the software might be in basins in the Rocky Mountain area, the researchers added. Conroy, Anemone and their colleagues also plan to use the system to search for early hominid fossil sites in South Africa.

The scientists detailed their findings at the Society of Vertebrate Paleontology meeting in Las Vegas Nov. 3 and online Oct. 27 in the journal Evolutionary Anthropology.