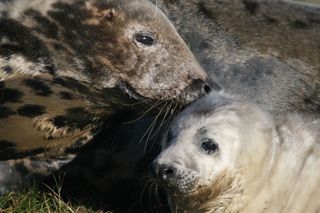 Mother seals' personalities determine whether they will frequently check on their pups to make sure they are safe, according to the researchers. In the above photo, an attentive gray seal mother checks up on her pup.
(Image: © Durham University )

Gray seals have widely varying mothering styles, with some inattentive seal moms barely checking up on their pups at all, even if they sense a threat to their safety, a new study on seal colonies in Scotland finds.

The scientists involved in the study contributed the various parenting styles to personality differences among the wild gray seals (Halichoerus grypus). Their personalities determine how these marine mammals respond to different situations, and, in turn, the extent to which they guard and care for their young, according to the study.

Over the course of two years, the researchers observed seals in their natural habitat on the Scottish island of North Rona during their breeding season, which takes place between September and November. Monitoring the behavior of the seals for two years was possible because many seals return to the same site to breed, and the researchers were able to identify particular seals by their individual fur patterns.

To study how the seals reacted to external stimuli and potential threats, the team fitted a remote-controlled vehicle (RCV) with a video camera and programmed the vehicle to approach the seals. The researchers conducted 11-minute-long tests on 28 females, during which the vehicle approached the seals while emitting a wolf call.

The results showed that the seals' responses ranged from completely ignoring the RCV's presence to being aggressive and pushing it with their muzzles. The team gauged the seal mothers' responses by recording how many times the moms checked on their pups during a specific time period. Females tend to stay with their pups and conduct "checks" on them by raising their heads off the ground and moving it in the direction of their young in order to verify the pups' well-being.

"We found that some seal mothers are very watchful when something potentially threatening approaches them, while other mums (mothers) barely check their pups at all," study researcher Sean Twiss of Durham University said in a statement. "Why female gray seals express individually consistent patterns of pup checking is unknown."

Twiss added that you'd expect the moms "to change their behavior according to the situation, but the non-attentive mothers remained inattentive."

The researchers also used the RCV to check the male seals' responses, finding a similarly wide range of "fathering," with some seals rapidly retreating while other males approached the RCV in a challenging way, such as with their mouths open, which seals view as a threat.

"Our findings show that there is no such thing as an average seal," Twiss said. "Individuals behave differently and do so consistently."

Among both male and female seals, responses were not linked to factors such as age or size. The researchers noted that further studies are needed to better understand the nature and ecological consequences of individual differences in behavior.

The study was recently published in the journal Marine Mammal Science, and its findings will be presented at the 19th Biennial Conference on the Biology of Marine Mammals in Tampa, Fla., which started Sunday (Nov. 27) and continues through Friday (Dec. 2).