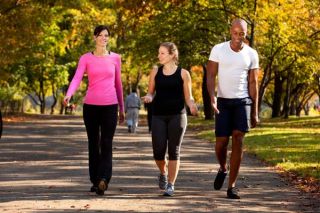 People who got 150 minutes of exercise a week reported a 65-percent improvement in their sleep quality.
(Image: © Dreamstime)

People who regularly hit the gym sleep better and feel more alert during the day than those who are not as physically active, according to a new study.

The results showed that people who did 150 minutes of moderate to vigorous activity a week reported a 65-percent improvement in sleep quality.

"Physical activity may not just be good for the waistline and heart, but it also can help you sleep," study researcher Brad Cardinal, professor of exercise science at Oregon State University, said in a statement.

Participants who worked out for at least 150 minutes also said that they felt less drowsy during the daytime, compared with those who were less physically active.

Cardinal and his colleagues studied a nationally representative sample of more than 2,600 men and women between the ages of 18 and 85.

They study adds to the evidence showing that "regular physical activity may serve as a non-pharmaceutical alternative to improve sleep," Cardinal said.

The study showed that the risk of often feeling overly sleepy during the day dropped by 65 percent for the more active participants.

The study authors noted that the national guideline that recommends getting 150 minutes of moderate to vigorous activity a week was originally set to improve cardiovascular health, but their findings show that that level of exercise has other health benefits as well. Approximately 35 percent to 40 percent of adults in the U.S. have problems falling asleep or experience daytime sleepiness, according to the National Institutes of Health.

Too tired to workout?

If you often experience daytime drowsiness, it may seem contradictory to spend even more of your lagging energy by going for a run or attending a Zumba class, but such physical exertion will actually make you feel more awake, according to the researchers.

"There are trade-offs. It may be easier when you are tired to skip the workout and go to sleep, but it may be beneficial for your long-term health to make the hard decision and get your exercise," Cardinal said.

The study will be published in the December issue of the journal Mental Health and Physical Activity.

Pass it on: People who get at least 150 minutes of exercise a week sleep better and feel more alert during the day than those that are not as physically active.