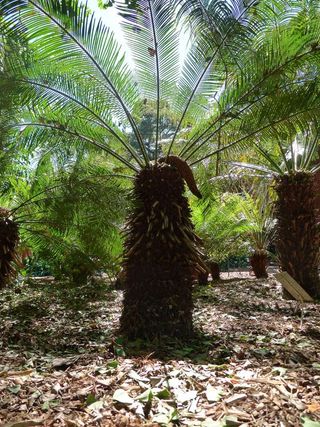 A pollen cone borne on the species Cycas taitungensis. This particular plant is growing in the Royal Botanic Garden, Sydney.
(Image: © Nathalie Nagalingum)

An ancient lineage of plants that resembles palm trees and are known as cycads once flourished on the Earth. Their descendants of these ancient plants were thought to be "living fossils" that were relatively unchanged since the Age of Dinosaurs.

Now scientists find that despite their old-school looks, modern cycads are not actually living fossils at all, but totally different from their bygone relatives.

Cycads have seeds, but neither flowers nor fruit. They first appeared on the planet hundreds of millions of years ago, before dinosaurs walked the Earth.

Cycads once dominated Earth's forests, along with conifers and relatives of the gingko tree. However, after flowering plants emerged, the cycads diminished; only about 300 cycad species now remain in tropical and subtropical regions of the world.

To learn more about cycads, researchers analyzed the genes of about two-thirds of all living cycad species, including representatives from all 11 remaining groups of cycads. They found these cycads only recently emerged sometime between five and 10 million years ago.

"We can now say that living cycad species are not ancient or leftovers from dinosaur times," said researcher Nathalie Nagalingum, a botanist at Sydney's Royal Botanic Garden in Australia. "All cycads, regardless of where they were growing in the world, only began diversifying 10 million years ago."

Intriguingly, "all of the major groups of cycads from all over the world — in Australia, Asia, South America, Africa — all started to diversify at 10 million years ago," Nagalingum told OurAmazingPlanet. "This indicated that a trigger may have been responsible."

As to what this trigger might have been, at approximately the time modern cycads emerged, the world's landmasses were assuming their current positions. This closed the last of the equatorial seaways that enabled warm tropical water to circulate the globe, leading to a shift from globally warm climates to present-day cooler, more seasonal climates.

As such, it seems the trigger for the evolution of modern cycads "was a change in the climate — that is, when global cooling began and when the world started having distinct seasons," Nagalingum said.

The remaining cycads are now the most endangered plants in the world. [Image Gallery: Plants in Danger]

"A major impediment to conserving the cycads is the lack of knowledge on them," Nagalingum said. "I will be using DNA to look at the genetic diversity of species, and ultimately, this information will inform recovery plans."

The scientists detailed their findings online Oct. 20 in the journal Science.