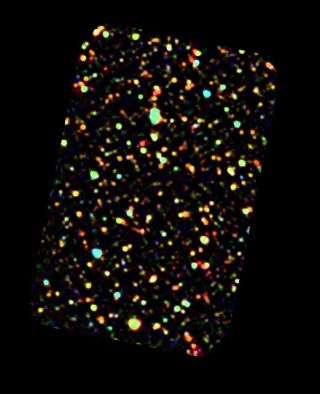 ESA's Herschel space telescope has discovered that previously unseen distant galaxies are responsible for a cosmic fog of infrared radiation. The galaxies are some of the faintest and furthest objects seen by Herschel, and open a new window on the birth of stars in the early universe. To date, it is the most sensitive image of the universe taken with Herschel.
(Image: © ESA/PEP Consortium)

The dark ages of the universe — an era of darkness that existed before the first stars and galaxies — mostly remain a mystery because there is so little of it to see, but scientists intensely desire to shed light on them in order to learn secrets about how the universe came into being.

"The dark ages represent our origins — when the very first stars formed and created the heavy elements we are made of today," said theoretical astrophysicist Abraham Loeb, chairman of the astronomy department at Harvard University.

Now researchers are developing tools for gazing back into this hitherto enigmatic time. To put things in perspective, astronomers estimate that the universe is 13.7 billion years old.

"Our existence is a result of these first generation of stars, so when we investigate the dark ages, we're exploring our origins," Loeb, who is also the author of "How Did The First Stars and Galaxies Form?" (Princeton University Press, 2010), told SPACE.com.

Before the dark ages of the universe, the cosmos was so hot that all the atoms that existed were split into positively charged nuclei and negatively charged electrons. These electrically charged ions blocked all light from traveling freely.

Approximately 400,000 years after the Big Bang, the universe cooled down enough for these ions to recombine into atoms, enabling the first light in the cosmos, that from the Big Bang, to finally shine. However, what came next were the dark ages of the universe — there was no other light, as the stars were not born yet.[Infographic Tour: History & Structure of the Universe]

Current models of the universe suggest the first galaxies began forming about 100 million years after the Big Bang, marking the beginning of the end of the dark ages. This process of star and galaxy formation gradually continued until virtually all the hydrogen and helium that make up most of the universe was once again ionized, this time by starlight, about 500 million years after the Big Bang.

Mysteries waiting to be solved

There are many questions that learning more about the dark ages could help answer. For instance, where did the monstrously large black holes seen at the hearts of virtually all large galaxies come from?

"That's not a lot of time to build such black holes," Loeb said. "How did these form? What are the seeds of these black holes?"

In addition, a major enigma of the dark ages is how dark matter — the as-yet unidentified materialmaking up about 85 percent of all matter in the universe — might have influenced the formation of the first galaxies. This question is compounded by the fact "that we don't know what the nature of dark matter is," Loeb said.

"If we assume dark matter is non-interacting, when people do simulations of the evolution of galaxies such as the Milky Way, there should be many satellite galaxies around it," Loeb said. "However, when people look at the satellite galaxy population of the Milky Way, they find much fewer than the predicted number, and the inferred distribution of dark matter inside these dwarf galaxies is very different than what is predicted for them as well. Perhaps dark matter behaves differently than expected."

Another puzzle is what the first stars were like. In the incredible heat and pressure found in the cores of these stars, relatively simple elements such as hydrogen and helium were forged into heavier elements such as the carbon that life as we know it is based on and the oxygen we breathe.

However, there are calculations that suggest that under some circumstances, smaller stars could have formed back then. "These would be very poor in heavy elements, and we might be able to see them today if they exist, lurking in the halo of the Milky Way," Loeb said. "Were the first stars different from present-day stars? If we can, we'd like to see them to find out." [The Big Bang to Now in 10 Easy Steps]

Secrets of the dark ages

To investigate the dark ages, one avenue scientists are pursuing involves hunting for the earliest stars and galaxies. Since it takes light time to travel, light that came from far away also must have come from long ago. As such, astronomers look deep in space to peer back in time.

"It's similar to archaeology — the deeper you dig, the more ancient layers you uncover," Loeb said. "Here, we're essentially digging in space."

One key tool for looking at the ancient past has recently drawn a great deal of controversy for its delays and cost — the James Webb Space Telescope. Still, if this space observatory ever flies, it could help reveal much about the early universe by catching the extremely faint light from the first galaxies.

"This telescope is the best hope we have to actually image the first generation of galaxies," Loeb said.

Another strategy for learning more about the dark ages would be looking at the scars that early stars and galaxies would have inflicted on the hydrogen surrounding them. Even cold hydrogen gives off light in the form of radio waves with a specific wavelength of 21 centimeters. By tuning in on that wavelength, scientists could thus see how this hydrogen changed over time in response to stellar radiation.

A number of radio telescope arrays under development will detect these 21-centimeter radio waves, Loeb said. These include the Murchison Widefield Array in western Australia, the Low-Frequency Array (spread across Europe, the Primeval Structure Telescope inChina, the Precision Array for Probing the Epoch of Reionization in South Africa, the Giant Metrewave Radio Telescope in India, and the Square Kilometer Array, to be constructed in either Australia or South Africa.

Scientists can also peer at early galaxies by looking for X-rays from their central black holes using telescopes such as NASA's Chandra X-ray Observatory. Future research could also detect the ripples in space-time known as gravity waves, released when black holes from early galaxies merged with each other.

A project called Advanced LIGOwill have sufficient sensitivity to see gravity waves from mergers of stellar-mass black holes in nearby galaxies within a few years from now, Loeb said. An even more ambitious project known as LISA that could detect mergers of supermassive black holes in distant galaxies was once on the books, but budgetary woes have officially scrapped itfor now.

"It will always pay to look at as much of the sky as we can," Loeb said. "You never know what you might find."