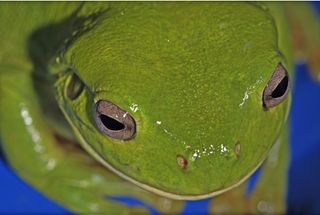 Frogs "fog up" by moving from cool, dry air to warm, humid burrows, according to an October 2011 study. This water-gathering mechanism prevents the amphibians from desiccating in the Australian dry season.
(Image: © Chris Tracy)

Australian green tree frogs manage to hop around the deserts of northern Australia during the dry season without dehydrating. Now, a new study solves the mystery of how: The frogs jump from cool night air to a warm burrow, 'fogging up' like a pair of glasses.

The amphibians then absorb the water that condenses on their skin, a clever adaption that allows them to draw water out of the air in a time of almost no rain.

The finding explains not only the frogs' survival but also their odd habit of late-night rambling, said study researcher Chris Tracy, a postdoctoral scientist in zoology at Charles Darwin University in Australia.

"Every once in a while, we would find frogs sitting on a stick under the open sky, on nights when it was so cold they could barely move," Tracy said in a statement. "It was a real puzzle."

Tracy and his colleagues reported their work in the October issue of the journal The American Naturalist.

Desert-dwelling animals often get creative in their search for water, and earlier laboratory experiments had suggested that some species of lizards, spiders and frogs could draw water from the air by moving from the cool outdoors to a warm, humid burrow, where droplets would condense on their skin. But no one knew whether animals really used this fogging-up technique in the wild. [Album: Bizarre Frogs, Lizards and Salamanders]

Tracy and his colleagues noticed a hollow eucalyptus tree in the northern desert of Australia that seemed to be a hopping spot for green tree frogs (Litoria caerulea). At least eight individuals at a time gathered in the hollow of the tree during the hot days of the dry season.

The researchers decided to test whether the tree also acted as a water-condensation station. They measured temperature and humidity inside the hollow, then captured 16 green tree frogs and cooled them in the outdoor air or chilly water. Next, they lowered the caged frogs into the hollow. Fifteen minutes later, they pulled the frogs out and measured their body mass. Any gain in mass would have to come from the amphibian absorbing condensed water through the skin.

Sure enough, the cooled-down frogs glistened with water droplets when placed in the warm hollow. They also gained up to 0.014 ounces (0.4 grams), almost 1 percent of their total body weight.

The finding suggested that the frogs were, in fact, drinking in condensed water through their skin. To make sure the water balanced out, the researchers conducted lab studies with frogs in various temperatures and humidity levels. They also calculated how much water a frog would lose by sitting out in the cool, dry night air. That estimate came to only 0.002 ounces (0.07 grams), much less than the frogs were gaining with the technique.

This may seem like a lot of work for a little water, but next to no rain falls in the desert frogs' home during the dry season, Tracy said.

"When there's no water available, even a small amount can mean the difference between surviving the dry season or not," he said.