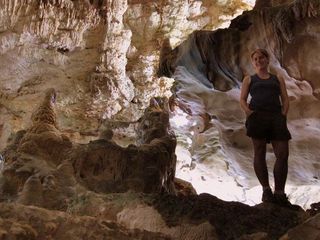 On the remote South Pacific island of Niue, a new kind of weather reporting is taking shape far below the clouds — clues found deep in caves on the island.

Paul Aharon, a geologist at the University of Alabama, started coming to do fieldwork on the island, which lies about 1,500 miles (2,400 kilometers) northeast of New Zealand, in 1997 for a completely different project. "I was working on a project examining sediment cores, trying to reconstruct sea level variation over the past 20 million years. That's when I noticed the caves,"  Aharon told OurAmazingPlanet.

Aharon recognized the potential of stalagmites in the caves to provide clues on Earth's past climate.

Stalagmites form slowly over thousands of years, as calcium, carbon and oxygen from water slowly dripping through the soil and rock above the cave builds up into the cone-shaped rocks seen on the cave floor.  "They're like a layer cake," Aharon said, "building layers one on top of other." [Related: Cave's Giant Crystals Take Eons to Grow]

The amount and type of carbon and oxygen isotopes in each layer tell the researchers how much rainfall there was when those layers were deposited. The amount of rainfall, in turn, will give an idea if that year was part of an El Niño (low rain) or a La Niña (high rain) cycle. El Niño is marked by warmer water in the Pacific off the coast of South America. It alters weather patterns in the United States and around the world. La Niña is marked by cooler-than-normal Pacific waters.

(Stalactites, which form on the ceilings of caves, are not such a wealth of information. "Because stalactites have a central pipe, they tend to get clogged and stop functioning," so they're records are effectively cut short, Aharon explained.)

The information gleaned from the stalagmite records can be compared with the island's 106-year-old human-kept records to see how closely they match.

This summer, Aharon returned to Niue with his students to take stalagmites from the caves to study back at his lab in Alabama.

Extracting the rocks and getting them home was a challenge. The team decided to split the load and bring half of the large pieces of rock home on the plane, and half shipped on a cargo vessel. How much does a 300-pound (140-kilogram) rock cost in excess baggage? "Too much!" Aharon said with a laugh.

To gain a clearer understanding of how the El Niño Southern Oscillation (as the overall climate pattern is called) affects the climate as a whole, Aharon wants to see how the process worked in the time before humans were adding carbon dioxide and other greenhouse gases to the atmosphere and impacting the global climate.

"We must go back before the anthropogenic factor, and see the effects of the southern oscillation. What were these events like before people?" Aharon said.

They are helped by the fact that Niue is a unique island in the Pacific. Rather than being composed of volcanic rock, as many other Pacific islands are, the island is made of limestone, making the caves and the stalagmites possible.

Aharon wants to return to Niue next year, to take a closer look at the caves themselves. In the meantime, there is plenty to keep his team busy back in the lab as they start uncovering the layers of the stalagmites, which cover 10,000 years of Earth's history. "We are trying to measure with an annual resolution, which means we have at least 10,000 samples to measure," Aharon said.