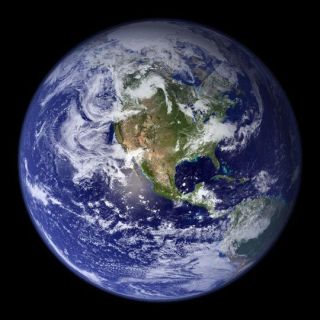 High in the sky ozone is protective, down by the ground it can be harmful.
(Image: © NASA/JPL)

Climate change may be worse for the lungs of some Europeans than others, according to researchers presenting today (Sept. 27) at the European Respiratory Society's Annual Congress. They predicted increases in ozone pollution-related deaths of between 10 and 14 percent for Belgium, France, Spain and Portugal over the next 50 years.

Meanwhile, Nordic and Baltic countries are expected to see a drop in such deaths, they said at the conference in Amsterdam.

Ozone is a two-faced gas. High in the stratosphere, it forms a protective layer that blocks ultraviolet radiation, which is potentially harmful to life, keeping it from reaching the surface of the planet. This happens at roughly 12.4 miles (20 kilometers) above the Earth's surface. Closer to the surface of the planet, ozone is a pollutant that can act as a greenhouse gas, trapping energy and warming the planet.

Breathing ozone can also cause health problems, including chest pain, coughing, throat irritation and congestion. It can aggravate conditions such as bronchitis, emphysema, and asthma, as well as reduce lung function and inflame the linings of the lungs, and repeated exposure to ozone may permanently scar lung tissue, according to the United States Environmental Protection Agency. [Kudzu Vines Could Increase Ozone Pollution]

Researchers led by Bertil Forsberg at the Umea University of Sweden made the ozone-related death projections as part of work the Climate-TRAP project to prepare for the changing public health needs expected to accompany human-caused climate change. They used two emissions scenarios — one for high growth, the other moderate — and two climate models to simulate how future ozone levels would be affected by climate change.

Ozone pollution forms when sunlight acts on certain chemicals, including nitrogen oxides and volatile organic compounds. An increase in temperature can increase these photochemical reactions, so warmer days correlate with higher ozone levels. However, there is a great deal of uncertainty in predicting how climate change will affect ozone levels, according to NASA's Goddard Space Flight Center's website.

When comparing the baseline period with the current situation, they found the largest increase in ozone-related deaths, of less than 4 percent, occurred in Belgium, Ireland, Netherlands and the United Kingdom. Comparing the baseline period and the further future, the biggest increase, of 10-14 percent, was projected in Belgium, France, Spain and Portugal. However, Nordic and Baltic countries may see a 10 to 14 percent decrease in ozone-related deaths, they found.