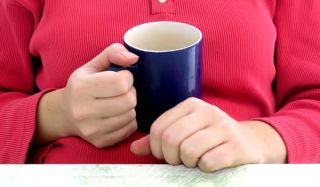 Women in the study who drank two to three cups of caffeinated coffee a day were 15 percent less likely to develop depression over a 10-year period compared to those who drank one cup of coffee or less per week.

The researchers cautioned, however, that the new study only shows an association between coffee consumption and depression risk, and cannot prove that drinking coffee reduces risk of depression in women.

The study, which included more than 50,000 women in the United States, is the largest of its kind, the researchers, from the Harvard School of Public Health in Boston, said.

The findings are in line with earlier studies that have found a link between moderate coffee consumption and a reduced risk of suicide.

The new study is just the latest to suggest coffee consumption has health benefits. Earlier work has found an association between drinking coffee and a reduced risk of breast cancer, prostate cancer and stroke.

"Taken together, these results reassure coffee drinkers that there seem to exist no glaringly deleterious health consequences to coffee consumption," Dr. Seth Berkowitz, wrote in an editor's note accompanying the new study.

Because the study only shows a correlation between coffee and the risk of depression, it's too soon for doctors to recommend coffee consumption to patients, Berkowitz said.

The study is published in the Sept. 26 issue of Archives of Internal Medicine.

The majority of adults in the United States consume caffeine, and coffee accounts for about 80 percent of daily caffeine consumption, the researchers said. But caffeine's effect on depression is not well understood, they said.

The researchers analyzed surveys of 50,739 U.S. women (average age 63) enrolled in a long-term study known as the Nurses' Health Study. From 1980 through 2004, participants filled out questionnaires about their caffeine consumption, including how often they drank coffee, tea and soda.

Participants were followed from 1996 to 2006 to see whether they were diagnosed with depression. None of the participants had depression at the study's start. Women were considered depressed if they had been given a diagnosis of clinical depression by their physician and they started taking antidepressants.

No link was found between consumption of decaffeinated coffee and depression.

Some individuals who consume caffeine experience sleep disturbances, insomnia or anxiety. It's possible that women with a history of depression, or women who are predisposed to depression, know about these side effects and reduce their caffeine consumption, the researchers said.

Emma Robertson-Blackmore, assistant professor of psychiatry at the University of Rochester Medical Center, calls the findings "interesting," but urged caution regarding the link.

For one, the women included in the study were nurses and their caffeine consumption may not be reflective of the U.S. women population in general, Robertson-Blackmore said.

The study also did not take into account factors known to trigger depressive episodes, including a past history of depression, financial difficulties and experiencing the death of someone close.

"Given how old the women were at the end of the study, you have to feel that most would be experiencing some of these changes," Robertson-Blackmore said.

Caffeine can make people feel more energized, focused and put them in a better mood in general. "This feeling could be reflected in the women’s assessment of their mood symptoms," Robertson-Blackmore said.

There are more robust predictors of depression other than how much caffeine you consume, Robertson-Blackmore said.

"Women should aim for a healthy balance in diet, stress reduction and exercise and be mindful of depression symptoms that require help from health professionals," she said.

Pass it on: Drinking two or more cups of coffee a day is associated with a reduced risk of depression in women.