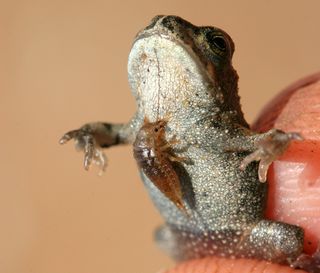 A beetle larva attached to the chest of an amphibian. The larvae lure in frogs and toads with enticing movements and then attack.
(Image: © Gil Wizen/AFTAU )

When frogs and toads see Epomis beetle larvae waggling their antennae and jiggling their jaws, they must think, "Aha! Easy meal."

But in a freaky turnabout, the little larvae latch onto the bodies of their would-be predators, sucking them dry of fluids, gnawing on their flesh, and leaving behind nothing but a pile of bones. [See a video of the grisly beetle feast]

This horror-movie scene is one of the few instances of prey not only confronting its predator, but also devouring it, researchers reported Sept. 21 in the open-access journal PLoS ONE. In some cases, the frogs and toads succeeded in swallowing the beetle larvae, only to vomit them up later. Post-regurgitation, the larvae promptly attached themselves to the amphibians and began to eat.

In one "extraordinary" case, wrote Tel-Aviv University study researchers Gil Wizen and Avital Gasith, a larva survived in the stomach of an amphibian for two hours before the larger animal vomited it back up.

In the wild, ground beetles are a favorite meal for frogs and toads, but researchers had noticed that the larva of several species of the ground beetle Epomis also prey on juvenile and adult amphibians. To figure out how this relationship works, they collected larvae of two ground beetle species, E. circumscriptus and E. dejeani, and placed them in containers with a variety of frog and toad species.

In 382 separate tests, they found that the larvae clearly had the upper hand. In every case, the encounter was fatal for the amphibian. But what made the interaction especially strange was how the beetle larvae often lured their larger predator to them. In 70 percent of the cases, the larva began moving its antennae and jaws in an enticing pattern as the frog or toad approached. The closer the potential predator, the more intense the movements. [40 Freaky Frog Photos]

When the amphibian responded to this siren song by pouncing, the larva would evade capture and launch itself onto the nearest part of the frog or toad's body. Then it would settle itself in and start sucking.

Only seven frogs and toads managed to swallow the larvae, but in each case, the amphibian quickly threw up its would-be meal. The regurgitated larvae quickly rallied and attached themselves to the amphibians' mouths.

The larval beetles can spend their entire life cycle feeding off a toad or frog, Wizen said in a statement. (Adult beetles can also ambush amphibians, paralyzing them by severing their spinal cord or a crucial muscle.) The luckiest amphibians are those attacked by a larva in the first stage of its development: When those larvae need to molt, they fall off the frog, leaving a nasty scar.

A frog or toad attacked by a larva in the latter stages of its development, on the other hand, is out of luck. By that stage, the larva doesn't just suck an amphibian's juices; it starts chewing. Invariably, nothing is left behind but bones.

"It's really a predator-prey role reversal — the insect actually draws in its potential predator instead of avoiding it," Wizen said of the amphibian-beetle interactions. "It's quite a unique phenomenon."