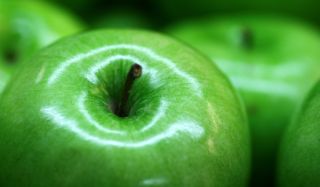 The old adage that "an apple a day keeps the doctor away" is a good one to follow, according to a new Dutch study. The researchers found that eating plenty of fruits and vegetables with white flesh, such as apples and pears, may protect you against stroke.

Although previous research has shown the positive health benefits of daily fruit intake, the new study suggests a link between stroke risk and fruits and vegetables of certain colors.

Researchers looked at the answers 20,000 adults gave to questions about what they ate over the previous year. The average age of the participants was 41, and all were free of cardiovascular diseases at the study's start.

Over the next 10 years, 233 suffered strokes. The researchers found that the risk of stroke was 52 percent lower for people with a high intake of white fruits and vegetables, compared with people who ate few foods in that color group.

The researchers classified fruits and vegetables into four color groups: orange/yellow, which contained mostly citrus fruits; green, which had dark leafy vegetables, cabbages and lettuce; red/purple, for mostly red vegetables; and white, of which 55 percent of the foods eaten were apples and pears.

The fruits were grouped based on the color of their flesh, not their skin. For example, a red apple belongs to the white group because although its skin is red, its flesh is white.

The color of the edible portion of fruits and vegetables reflects the presence of plant compounds such as carotenoids, which are organic pigments, and flavonoids.

Apples and pears may lower stroke risk because they are high in dietary fiber and an antioxidant flavonoid called quercetin, the researchers said. Other foods classified in the white category were bananas, cauliflower and cucumbers. (Potatoes were classified as a starch.)

Green, orange/yellow and red/purple fruits and vegetables didn’t affect participants' stroke risk, according to the study, but the study authors said that people shouldn't dismiss them as less beneficial overall.

"Other fruits and vegetable color groups may protect against other chronic diseases," Oude Griep said.

The researchers also warned that the study findings should be interpreted with caution because food frequency questionnaires are subject to errors.

"The observed reduction in stroke risk might further be due to a generally healthier lifestyle of individuals consuming a diet rich in fruits and vegetables," according to Dr. Heike Wersching, of the Institute of Epidemiology and Social Medicine at the University of Münster in Germany, who was not involved in the study but wrote an editorial accompanying it in publication.

The study was recently published in Stroke: Journal of the American Heart Association.

Pass it on: Increasing your daily intake of "white fruits," such as apples, pears and bananas, may lower your risk of stroke, a new study shows.