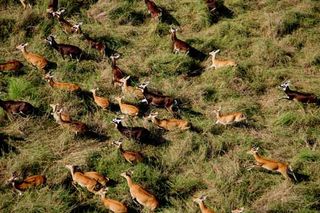 NEW YORK -- More than a million animals, including elephants, buffaloes, ostriches, lions, giraffes and a rare type of stork, have been unexpectedly seen living and migrating across Southern Sudan, where no surveys of wildlife had been conducted for the past 25 years due to civil war in the region. Decades of war wrought significant damage to the region, along with excessive hunting, desertification of the land and periodic droughts, so wildlife numbers were declining in the stricken country. Based on observations in other war-torn nations, conservationists thought the wildlife in Southern Sudan would be wiped out, but it wasn't. Officials told scientists they had seen herds of animals in the region. "Although we were telling people that wildlife was still present in southern Sudan, nobody believed us," said Maj. Gen. Alfred Akwoch, undersecretary of the Ministry of the Environment, Wildlife Conservation and Tourism for the government of Southern Sudan. After Southern Sudan was granted autonomy by the Sudanese government in January 2005, (bringing a tentative end to the two-decade Second Sudanese Civil War), scientists were finally able to conduct aerial surveys of the savannahs for wildlife. To their surprise, they counted more than 1.2 million white-eared kob, tiang antelope and Mongalla gazelle. They also saw at least 8,000 elephants, it was announced today at a news conference here. "I haven't seen anything like this, even in the Serengeti [Plain, in Tanzania]," said J. Michael Fay, a conservationist with the Wildlife Conservation Society. During the survey, scientists first saw a few kob, then a few hundred, then so many that "it looked like the ground was moving," Fay said. Fay estimates that this migration is at least the third largest of terrestrial animals in the world, possibly even the largest. "I think what we found in Sudan is nothing short of extraordinary," Fay said.

The survey, which covered a quarter of the surface area of Southern Sudan, replicated an aerial survey conducted in 1981 and found that in some areas, there were even more of certain types of animals than there were two decades ago--the numbers of Mongalla gazelle, for example, sky-rocketed.

Not all areas of Southern Sudan faired as well though; the Southern National Park saw 90 percent losses in some key species such as buffalo and elephants. Scientists suspect that the Janjaweed militias are coming down from northern Sudan and killing the buffalo for food and other uses.

Zebras were also scarce from what the scientists saw, though they plan to go back and conduct further surveys which should show that this survey actually underestimated many animal populations. Because of the peace accord, Southern Sudan is a geographically and politically distinct region from northern Sudan, where the tumultuous Darfur region is located.